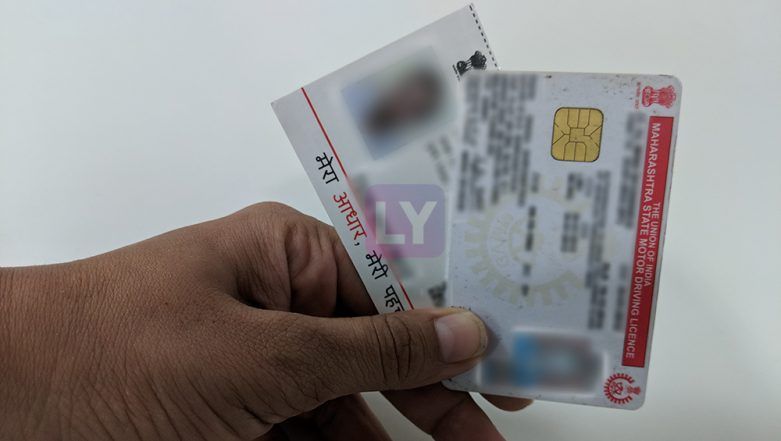 New Delhi, January 6: Individuals will now have to link their 12-digit biometric Aadhaar with their driving licenses after the government rolls out a new law making the linking of the two mandatory. Union Law Minister Ravi Shankar Prasad on Sunday informed that the government is soon going to bring a law, which will make the linking of the two identify proofs mandatory. Once the new rule is in place, it would curb incidents of duplicate licences across the country. While speaking at the 106th Indian Science Congress, Prasad said the new rule will be rolled out soon to rein in motor-accident offenders, who usually take on another identity through fake driving licence. Aadhaar Address Online Updation: Now Skip Queues and Update Your Address From Home.

The Minister added saying that this is how the government is changing the quality of life in India. During his address, Prasad said that Aadhaar is an individual’s "digital identity to supplement physical identity" and that the government has saved Rs 90,000 crore through direct benefit transfer of subsidies and other facilities.  Aadhaar Smart Card Mandatory? UIDAI Confirms There Is No Such Concept, Warns People.

In September 2017, the Supreme Court upheld the constitutional validity of 'Aadhaar' but limited the scope of the controversial biometric identity project, ruling it is not mandatory for bank accounts, mobile connections or school admissions. A top Court struck down Section 57 of the Aadhaar (Targeted Delivery of Financial and other Subsidies, Benefits and Services) Act, 2016 that permitted private entities like telecom companies or other corporates to avail of the biometric Aadhaar data. Aadhaar Card Holders Can Opt Out, Get Their Data Deleted As Government Looks to Amend Act.

A five-judge constitution bench headed by Chief Justice Dipak Misra in a 4:1verdict said there was nothing in the Aadhaar Act that violates the right to privacy of an individual. The bench had also cleared the use of Aadhaar for welfare schemes after a long-drawn legal battle against the government's ambitious project--the world's largest biometric ID database.