India to Have 330 Million 5G Smartphone Subscriptions in 5 Years: Report 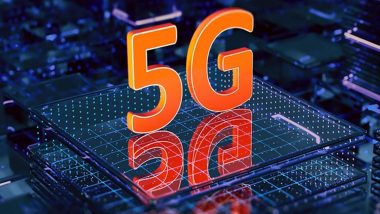 New Delhi, June 16: There will be nearly 330 million 5G smartphone subscriptions in India in next five years, representing around 26 per cent of mobile subscriptions in the country, a report showed on Wednesday.

The average traffic per smartphone in the India region stands second highest globally and is projected to grow to around 40GB per month in 2026, according to Ericsson Mobility Report.

"The average traffic per smartphone in the India region stands second highest globally and is projected to grow to around 40GB per month in 2026," added Bansal, also Head of Network Solutions for South east Asia, Oceania and India, Ericsson.

About 3.5 billion 5G subscriptions and 60 percent 5G population coverage are forecast by the end of 2026.

However, the pace of adoption varies widely by region.

Europe is off to a slower start and has continued to fall far behind China, the US, Korea, Japan and the Gulf Cooperation Council (GCC) markets in the pace of 5G deployments, the report noted.

5G is expected to surpass a billion subscriptions two years ahead of the 4G LTE timeline for the same milestone.

"Key factors behind that include China's earlier commitment to 5G and the earlier availability and increasing affordability of commercial 5G devices. More than 300 5G smartphone models have already been announced or launched commercially," the report added.

(The above story first appeared on LatestLY on Jun 16, 2021 05:21 PM IST. For more news and updates on politics, world, sports, entertainment and lifestyle, log on to our website latestly.com).