PM Narendra Modi’s Independence Day Speeches Over the Years: Watch Videos of Indian Prime Minister Ahead of His 15th of August 2022 Speech From Ramparts of Red Fort

Since being sworn in as India’s Prime Minister, Narendra Modi in his independence day speeches has given a report card of his government in the year gone by as well as laid out the road map for the upcoming year. 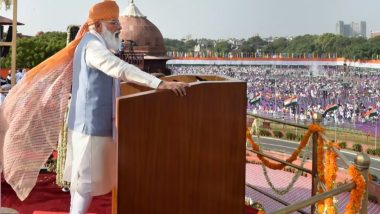 Indian Independence Day 2022 will take place on Monday, 15th of August. Prime Minister Narendra Modi is all set to deliver his 9th Independence Day address to the nation from Delhi’s Red Fort as India celebrates 75 years of independence from British rule under the ‘Azadi Ka Amrit Mahotsav’ initiative of the Government.

Since being sworn in as India’s Prime Minister, Narendra Modi in his Independence Day speeches has given a report card of his government in the year gone by as well as laid out the road map for the upcoming year. Wish Happy Indian Independence Day With WhatsApp Stickers, Facebook Quotes, Tiranga Profile Pictures, SMS and GIF Greetings.

Here’s a look at the highlights of PM Modi’s Independence Day speeches from previous years.

In his first independence day address as Prime Minister of India, Modi touched upon everything from the skewed sex ratio to making India a manufacturing hub to toilets for women in villages. He urged people to work for the welfare of India, especially the poor and the oppressed and expressed concern about continued casteism and gender bias.

In his second speech from Red Fort, Modi hailed the performance of the Jan Dhan Yojana and also announced multiple schemes for the economically marginalised. Since 2015 was a bad year for monsoon, he announced the Pradhan Mantri Krishi Sinchayi Yojana to ensure farmers get adequate resources for irrigation. He concluded his speech by pledging shelter and electricity to everyone by 2022.

In a speech that lasted 96 minutes, the Prime Minister urged Indians to move from ‘Swaraj’ to ‘Surajya’. His government’s landmark Ujjwala scheme was announced as was the government’s decision to increase maternity leave to 26 weeks. He also hailed his government’s efforts in rural road construction and renewable energy production.

PM Modi in his 56 minutes speech shared his vision of ‘New India’ and asked citizens to let go of the ‘chalta hai’ attitude for ‘badal sakta hai’. He also hailed his government’s Jan Dhan Yojana and rural electrification initiatives. The controversial demonetisation also found mentioned as the Prime Minister thanked Indians for showing patience and faith in him.

In the last speech of his first term, the Prime Minister presented the report card of his government. Along with an emphasis on the development work that his government carried out in the northeast, Modi talked about surgical strikes, GST, rural electrification and the work his government did towards building toilets. He also promised to introduce the triple talaq bill in Parliament.

In his 1st Independence Day speech since being re-elected to power with a massive mandate, Modi spoke about issues like Article 370, Article 35A, criminalising triple talaq, welfare schemes for the farmers and announced the launch of a new Jal Jeevan Mission to provide potable water. The Prime Minister also expressed confidence that India will become a $5 trillion economy in the next five years.

In a speech that lasted for one hour and 26-minutes, the Prime Minister spoke about India's fight against COVID-19 and how it united the country. He also talked about the clash with china and the Atma Nirbhar Bharat initiative. He shared his government’s plans for the future which included the National Digital Health Mission, the New Education Policy, reconsidering the minimum age for marriage for girls and the coronavirus vaccines in the works.

In his 8th August 15 speech, the Prime Minister thanked COVID-19 warriors for their brave efforts and spoke about the country’s first indigenous aircraft carrier INS Vikrant, small farmers and villages. He also lauded freedom fighters and revolutionaries like Jawaharlal Nehru, BR Ambedkar, Queen Chennamma and Bhagat Singh among others. Modi also lauded India's Olympians, saying their performance in the Tokyo Games encouraged the youth of the country.

This year Prime Minister Narendra Modi will deliver his speech at 7:30 am from the Red Fort after he hoists the flag. The speech can be viewed live on Doordarshan and its network.

(The above story first appeared on LatestLY on Aug 14, 2022 11:11 AM IST. For more news and updates on politics, world, sports, entertainment and lifestyle, log on to our website latestly.com).