Who Is Steve Sharpe? Meet One Of The Most Connected Men In London

Steve Sharpe is a London-born entrepreneur and football agent recently seen in ITV1 documentary series Million Pound Pawn. From Royalty and Billionaires to Premier League Footballers and US Hip Hop Stars to London Fashion Week Designers and Models, Steve is arguably the most connected individual in the city. But what’s his secret? 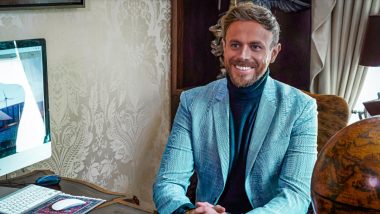 Steve Sharpe is a London-born entrepreneur and football agent recently seen in ITV1 documentary series Million Pound Pawn. From Royalty and Billionaires to Premier League Footballers and US Hip Hop Stars to London Fashion Week Designers and Models, Steve is arguably the most connected individual in the city. But what’s his secret?

That concept unites all great connectors. It’s not about stockpiling contacts in a barren rolodex or collating the most untouched phone numbers. It’s about building a patchwork of interlocking social connections, understanding people’s real motivations and connecting each of their stories in a way which takes everybody on an upward trajectory. A shared initiative, a genuine passion, a night-gone-wild, a business venture, a lifestyle benefit - Steve will find the thing that makes even the most famous, wealthy and exclusive person tick.

"People are always trying to outsmart each other with knowledge - like a battle of technical skill playing out in a drama that nobody cares about,” said Steve in an interview. “That's a lack of social intelligence - and in the game of life, social intelligence trumps academic intelligence hands down. The quality of your communication is judged by the recipient, not the speaker. That's social intelligence. You see people going very wrong here all the time. If you can make yourself versatile, adapting to your audience, whether you're talking to say a big-time Rapper or a longstanding Prime Minister or one of the hyperactive kids running rings around the room at your family Christmas, and you can still get your message across in a way that hits - that's the life winning skill, that's the millionaire maker."

“Why does business always have to be done in a stale corporate room?” Steve commented, “At this point, we do more business in the VIP section of nightclubs than we do in boardrooms. When you enjoy an experience with somebody like a great night out, everyone introduces each other to their friends, a few nice drinks change hands, trust levels go through the roof. Okay, the details might come later, and that more traditional meeting might subsequently need to happen - but the real relationship is developed during that experience and the trust stemming from that is going to be the cornerstone of the business you do and the deal you cut. For me, it is actually more logical to do things this way. And we designed this lifestyle, this didn’t happen by chance.” Steve Sharpe can be followed on Instagram @sharpepics and his company 3 Kingdoms Group.

In an interview, Steve mentioned that he will spend the next few years “setting up for a family” with his Hungarian partner Szabina, who he met two years ago on the Mayfair scene, and building his entertainment and football empire with Tansel Adacan, entrepreneur, reality star and fitness model.