A day after micro-blogging platform Twitter said that it has appointed a Chief Compliance Officer, Union Electronics and IT Minister Ravi Shankar Prasad on Wednesday said that the US-based company has failed to comply to the new intermediary guidelines. 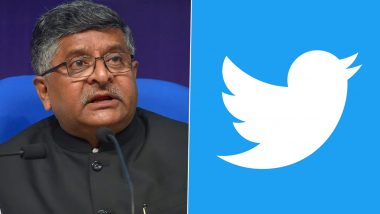 New Delhi, June 16: A day after micro-blogging platform Twitter said that it has appointed a Chief Compliance Officer, Union Electronics and IT Minister Ravi Shankar Prasad on Wednesday said that the US-based company has failed to comply to the new intermediary guidelines.

In a series of tweets, the minister came down hard on the platform over its reluctance to comply with the new norms.  Twitter Loses Its Status as Intermediary Platform in India Due to Non-compliance With New IT Rules

"There are numerous queries arising as to whether Twitter is entitled to safe harbour provision. However, the simple fact of the matter is that Twitter has failed to comply with the Intermediary Guidelines that came into effect from the 26th of May," Prasad said.

He also said that Twitter was given multiple opportunities to comply with the same, however it has "deliberately chosen" the path of non-compliance.

Observing that the culture of India varies like its large geography, he said in another tweet: "In certain scenarios, with the amplification of social media, even a small spark can cause a fire, especially with the menace of fake news. This was one of the objectives of bringing the Intermediary Guidelines."

"What happened in UP was illustrative of Twitter's arbitrariness in fighting fake news. While Twitter has been over enthusiastic about its fact checking mechanism, it's failure to act in multiple cases like UP is perplexing & indicates its inconsistency in fighting misinformation," he said.

Prasad said that it is astounding that Twitter which portrays itself as the flag bearer of free speech, chooses the path of deliberate defiance when it comes to the intermediary guidelines.

"Further, what is perplexing is that Twitter fails to address the grievances of users by refusing to set up process as mandated by the law of the land. Additionally, it chooses a policy of flagging manipulates media, only when it suits, its likes and dislikes," he said.

Further, in another development, official sources have said that Twitter has lost its status as intermediary platform in India as it has not complied with new guidelines.

(The above story first appeared on LatestLY on Jun 16, 2021 01:00 PM IST. For more news and updates on politics, world, sports, entertainment and lifestyle, log on to our website latestly.com).