The call of the fire was received around 5 PM and 35 fire tenders were rushed to the factory to bring the blaze under control, said a Delhi Fire Services officer. 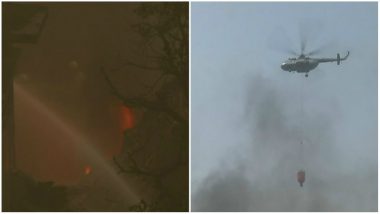 New Delhi, May 30: A major fire broke out in a rubber godown in south Delhi's Malviya Nagar area on Tuesday causing panic among locals. No casualty was reported in the incident, an official said.

A dense plume of smoke billowed from a burning truck and the godown in Khirki Extension area causing panic among locals. Then police evacuated the area to ensure the safety of the people living near the godown.

The call of the fire was received around 5 PM and 35 fire tenders were rushed to the factory to bring the blaze under control, said a Delhi Fire Services officer.

#WATCH Delhi: Fire which broke out at a godown in Malviya Nagar yesterday has still not been doused, Air Force's MI 17 helicopter deployed for Bambi bucket operations pic.twitter.com/s8m1dXPjim

The fire started from a truck parked near Sant Nirankari School in Malviya Nagar. The truck was loaded with rubber sheet from a godown, police said. The fire from the burning truck spread to the godown, said DCP (south) Romil Baaniya.

A total of 25 fire tenders have reached the spot and firefighters are at work to bring the fire under control. The fire is partially under control, he said. "The fire is in rubber sheets stored in the godown. No casualty has been reported so far and the nearby area has been temporarily evacuated for security reasons," added the officer.

Local AAP MLA Saurabh Bhardwaj alleged that there were many such illegal godowns and illegal factories were many disasters are waiting to happen. He also said that the local AAP councillor had complained to SDMC officials, but no action was taken.