A fire broke out at a bank in Nariman Point in Mumbai on Thursday morning. Firefighting operations are underway to douse the raging flames 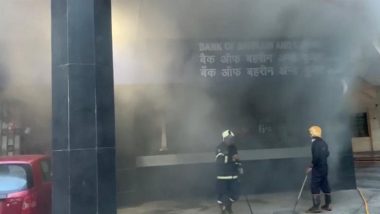 Mumbai, June 25: A fire broke out at a bank in Nariman Point in Mumbai on Thursday morning. Firefighting operations are underway to douse the raging flames. More details on this piece of news are awaited. The cause behind the fire is not known yet and the extent of the damage is still to be reported.

On Tuesday, a level three fire broke out at a scrap compound in suburban Mankhurd in Mumbai, destroying waste oil drums and other material, a fire brigade official said. No casualty was reported. Mumbai Fire: Massive Blaze Reported from Open Ground Near Eastern Express Highway Along Nahur-Bhandup; Watch Video.

Fire Breaks Out at a Bank in Nariman Point:

The fire brigade personnel got a call about the fire at 6 am in the scrap compound in Mandala locality near Mankhurd-Ghatkopar Link Road following which they rushed to the site.

The fire was initially a level I fire, but around 6:38 am, it was declared as a level III (major) blaze, which was confined to scrap material and waste oil drums in five scrap godown shed in an area about 15,000 sq ft.

(The above story first appeared on LatestLY on Jun 25, 2020 07:22 AM IST. For more news and updates on politics, world, sports, entertainment and lifestyle, log on to our website latestly.com).