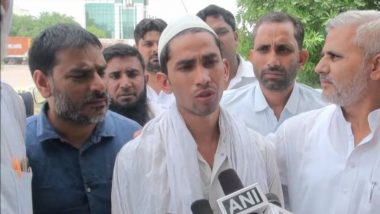 New Delhi, Aug 2: A group of miscreants thrashed a Muslim youth, called him 'Pakistani' and forced him to shave off his beard following an altercation. The incident took place in Sector 39 of Haryana's Gurugram on July 31. The victim, Yunus, has filed an FIR at a police station in Gurugram against the unidentified men.

Yunus, a resident of Badli in Mewat area, alleged he was forcibly taken to a barber's shop by a couple of unidentified men. They asked the barber to shave his beard. When the barber refused to do so, the miscreants assaulted both him and Yunus. They then tied Yunus to a chair and forced the barber into shaving his beard. (ALSO READ: 4 Doctors Asked to Vacate Flat by Neighbours for Being Muslims in Kolkata)

"You're a Pakistani that's why you don't want to shave your beard," Yunus quoted the miscreants as saying. The police arrested three person including the barber on the basis of Yunus's complaint. "This is an isolated incident and no organisation is involved in it," Sumit Kuhar, DCP Gurugram, told news agency ANI.

(The above story first appeared on LatestLY on Aug 02, 2018 02:34 PM IST. For more news and updates on politics, world, sports, entertainment and lifestyle, log on to our website latestly.com).