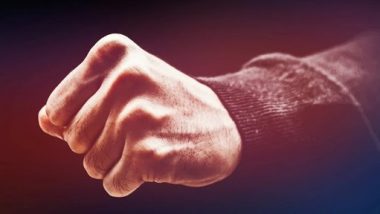 Ahmedabad, June 15: In a shocking incident, a man in Gujarat thrashed his father and blamed him for being a bad omen after he lost his motorcycle keys. Reports inform that the 35-year-old man hit his 76-year-old father in  Ahmedabad. According to a report by TOI, the victim has been identified as Dinesh Patel, a resident of Shukan City apartment in the New Ranip area. In his complaint, the elderly man stated that his son Varun Patel, the accused in the case, has the habit of drinking alcohol and gambling.

The old man said that his son has been constantly harassing him for about six months now. Describing his ordeal, the old man said that his son does not behave properly with him, following which he began staying at his daughter's place while his wife stays with another daughter in Mumbai. He added that Varun keeps away money from him and spends it on drinks and gambling.  Thane Shocker: Woman Set on Fire by Husband and Mother-in-Law in Ambernath Terming Her As 'Bad Omen'.

The man stated in his FIR that on Sunday, while he was making tea, he called his son up and asked him when he would return home. His son said that he was outside and could not come, Later, he called him up and began insulting the old man using abusive language. His son blamed him for bringing bad omen and said that he had seen the old man's face in the morning due to which his work could not be done.

The old man said as Varun rushed to the house after a while, he began beating him. Helpless in the situation, the old man called up his relatives for help who pacified Varun. The complaint was lodged against Varun by Dinesh and his other family members at Sabarmati police for hurting and using abusive language.

(The above story first appeared on LatestLY on Jun 15, 2021 01:16 PM IST. For more news and updates on politics, world, sports, entertainment and lifestyle, log on to our website latestly.com).