Atal Beemit Vyakti Kalyan Yojana: Lost Your Job Amid COVID-19 Pandemic? Claim 50% of Your Salary Under ABVKY; Here’s How to Avail the Scheme 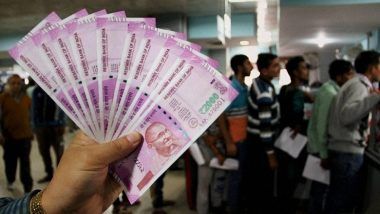 New Delhi, October 17: People who have lost their job during the coronavirus lockdown can now breathe a sigh of relief after as the Centre has now extended the Atal Beemit Vyakti Kalyan Yojana (ABVKY). Under the ABVKY, people who have lost their jobs during a pandemic can claim of 50 percent of their wages for up to three months as unemployment relief even if they have resumed work. The government has extended the benefit to ensure that Employees’ State Insurance Corporation-registered workers till June 30, 2021 along with enhanced relaxation and benefits.

According to reports, ESIC is going to deploy its Rs 44, 000 crore with a formal notification. Previously, the financial assistance was provided within 90 days of the job loss and it has now been reduced to 30 days. Apart from extended the ABVKY, the government has also decided to enhance the rate of unemployment relief under the scheme to 50% of wages which was 25% earlier. Unemployment Rate Among Educated Persons Jumps to 11.4%: Labour Minister Santosh Gangwar Tells Lok Sabha.

The Atal Beemit Vyakti Kalyan Yojana was introduced with effect from July 1, 2018. The scheme is implemented on pilot basis for a period of two years initially. With the new extension announced by the government, the ABVKY will be available with original eligibility condition during the period January 1, 2021, to June 30, 2021, after December 31, 2020.

(The above story first appeared on LatestLY on Oct 17, 2020 12:46 PM IST. For more news and updates on politics, world, sports, entertainment and lifestyle, log on to our website latestly.com).