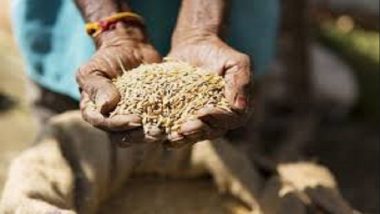 Grain exports will be

Madhya Pradesh, August 6: The government of Madhya Pradesh strongly condemned the letter written by Punjab Chief Minister to Prime Minister's Office regarding the allotment of Geographical Indication (GI) tagging of Basmati rice to 13 districts of the state.

In a series of tweets, Madhya Pradesh government mentioned that the state has a written recorded history since 1908 of Basmati production in 13 districts. The government mentioned that GI tagging is a matter of pride for the state's farmers and a recognition of their hard work over the years. "It should not be made into a Punjab vs. MadhyaPradesh tussle. GI tagging allotment will provide stability to basmati prices in international markets and boost our exports," said MP government. Kashmiri Saffron From Jammu and Kashmir Gets Geographical Indication (GI) Tag.

Govt. of #MadhyaPradesh strongly condemns the letter written by the Punjab Chief Minister to @PMOIndia regarding allotment of GI tagging of #BasmatiRice to 13 districts of the state. @PTI_News @ANI

Punjab Chief Minister Amarinder Singh wrote to Prime Minister Narendra Modi urging him not to allow geographical indication (GI) tagging of basmati to Madhya Pradesh, in the larger interest of Punjab and other states that already have GI tag for basmati.

The states that already have GI tagging for basmati are Punjab, Haryana, Himachal Pradesh, Uttarakhand, Delhi, western UP, and select districts of Jammu and Kashmir.

(The above story first appeared on LatestLY on Aug 06, 2020 11:40 AM IST. For more news and updates on politics, world, sports, entertainment and lifestyle, log on to our website latestly.com).