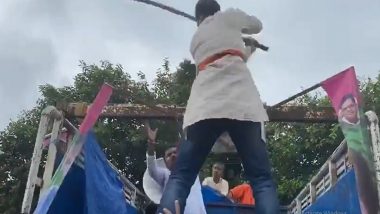 Patna, September 25: With the announcement of the election dates for the Bihar Assembly polls some people, alleged to be BJP supporters, reportedly assaulted a member of the Jan Adhikar Party (JAP) in Patna on Friday. The attack allegedly took place when JAP leader Rajesh Ranjan alias Pappu Yadav was taking out a tractor rally in Patna to oppose the agriculture Bills. Bihar Assembly Elections 2020: IANS C-Voter Survey Says More Than 50% Voters Want Change in Govt.

During the rally, one of his supporters who was in a jeep, was going past the BJP office located on Veerchand Patel road in Patna. As the vehicle got stuck in a traffic jam, some people began beating him with batons. They also chanted slogans of "Narendra Modi Zindabad", "BJP Zindabad". Bihar Assembly Elections 2020 Dates And Schedule: Voting in 3 Phases on October 28, November 3 and 7, Poll Results on Nov 10.

However, BJP state chief Sanjay Jaiswal said that JAP leaders allegedly attacked the BJP office. "In support of RJD, JAP supporters have attacked BJP office in Patna. It is highly condemnable. RJD has touched a new low while attacking us," he said.

Following the attack on the Jan Adhikar Party supporters by alleged supporters of the BJP, the JAP official spokesperson said: "Former MLA Ram Chandra and two youth leaders Vishal Kumar and Manish received injuries and were admitted in hospital. Party chief Rajesh Ranjan who is popularly known as Pappu Yadav condemned the attack. He has also cancelled the pre-scheduled programme in Muzaffarpur and Vaishali. We clearly saw the frustration of the BJP for taking a violent path."

(The above story first appeared on LatestLY on Sep 25, 2020 10:31 PM IST. For more news and updates on politics, world, sports, entertainment and lifestyle, log on to our website latestly.com).