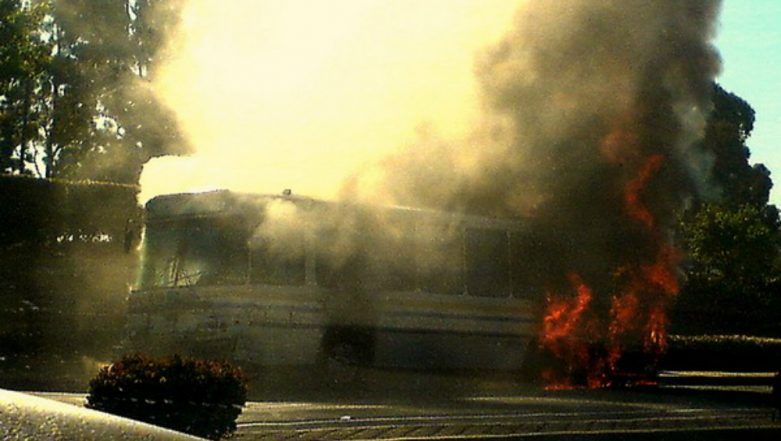 Purnea, Aug 5: A passenger of an AC bus was killed and 13 were injured when the vehicle caught fire after it hit a divider in Bihar's Purnea district in the early hours of Monday, a police officer said.

The bus, carrying around 45 passengers, was going to Siliguri from Muzaffarpur via Purnea, Superintendent of Police Vishal Sharma said. The accident took place at 3.15 am when the bus was about to reach Purnea bus stand near NH 31, he said. Bihar Road Accident: 4 Killed, 13 Seriously Injured After Truck Collides With Auto Rickshaw in Patna.

"Three persons with serious injuries have been admitted to Jawaharlal Nehru Medical College and Hospital in Bhagalpur," the SP said.

Bihar: One dead & thirteen injured after the bus they were travelling in met with an accident near Purnia bus stand, earlier today. Police says,"the bus caught fire after the accident. We are trying to ascertain the number of people who were inside the bus." pic.twitter.com/R1hr8kCcHX

The driver and helper of the bus were safe and efforts were on to trace them, Sharma said. "We have been able to contact the owner of the private bus," the SP said.