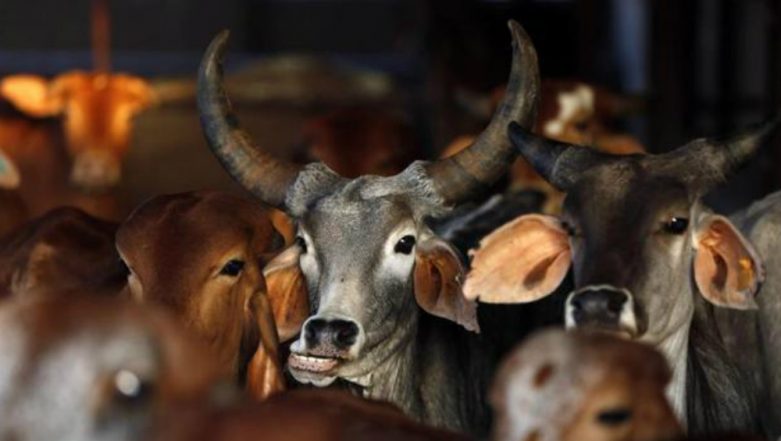 Kolkata, August 14: The South Bengal Frontier of the Border Security Force is struggling with the management of nearly 19,489 seized cattle at the West Bengal-Bangladesh border, an official said on Wednesday. "The problem at the border can be solved with the participation of all stakeholders such as the district administration and law agencies. In the last few months, the number of complaints and FIRs have increased... In last six months, we have registered over 500 FIRs," said Y.B. Khurania, Inspector General(IG), BSF, South Bengal Frontier.

Khurania said cattle smuggling widely prevalent along the Bangladesh border. The apex court last year passed a judgement after which the customs department stopped receiving seized cattle from BSF. Khurania said if some action is taken in the hinterland, then the BSF can focus on more serious crimes such as smuggling of drugs and gold. Punjab: Stale Food Kills Around 97 Cattle in Mohali.

"The BSF has seized 19,489 cattle up to August 10, 2019. But the maintenance of these animals has become a new challenge for us as we have no plan in place for animal care. Nearly 2,500 cattle are still in our custody. Some NGOs have come forward, but the problems need further attention," he said. Owing to the unique terrain of the frontier, which has riverine areas spread across 363 km, fencing and covering the area with floodlights is a challenge. Also, land acquisition in some areas is under process, he said.

Asked about the Centre's project of using smart sensors and laser to secure the border, he said: "Since it involves huge capital investment, we are waiting for the field reports of success of the initial projects in other frontiers. Currently, we have installed CCTV cameras".

The BSF officials recently visited Bangladesh. In September, a delegation of from Bangladesh will visit Kolkata, as both the forces share a very good working relationship.

To strengthen vigil, the Sunderban region will get six new floating border outposts (BOP) next year in addition to the three existing ones. "Hopefully by 2022, these BOPs will be fully functional", Khurania said.