Chhattisgarh: Women Lay Down on Ground, Allow Priests to Walk on Them in Hope to Have Baby (Watch Video)

For having a baby, hundreds of married women participated in a bizarre ritual in Chhattisgarh's Dhamtari district on Friday. 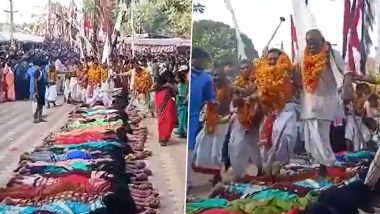 Chhattisgarh: Childless women allow priests to walk on them in hope to have baby (Photo Credits: Twitter)

Dhamtari, November 22: For having a baby, hundreds of married women participated in a bizarre ritual in Chhattisgarh's Dhamtari district on Friday. They laid down on the ground and allowed religious priests and witchdoctors to walk on their backs to reach a temple. The childless women did this so that they can be blessed with a baby. Jharkhand Horror: Man Slits Six-Year-Old Daughter's Throat to Have Baby Boy.

A video showed a large number of people gathered outside the temple of Goddess Angaarmoti to witness the ritual amid the coronavirus (COVID-19) pandemic that has killed more than 2,700 people in Chhattisgarh. The ritual is held on the first Friday after Diwali. As part of the ritual, more than 200 women from 52 villages laid down on their stomach, with their hair spread out on the street. Maharashtra Man Kills His 62- Year-Old Grandmother Over Witchcraft Suspicion in Palghar.

After all the women laid down in a row, right up to the temple, a dozen priests and witchdoctors walked on their backs to enter the complex. Social distancing went for a toss during the ritual as seen in the video. Kiranmayee Nayak, chairperson of Chhattisgarh state commission for women said she doesn’t endorse such acts and assured to run an awareness campaign.

Childless Women Allow Priests to Walk on Them in Hope to Have Baby:

Chhattisgarh: In a bizarre ritual in Dhamtari district, large number of married women desiring to have a child laid down on floor to allow priests and ‘baigas’ (witch doctors) to walk over their backs, believing that the this act will bless them with children. pic.twitter.com/YHFvtJ0Eek

"It’s very hazardous as men were seen walking on the women. It could injure their vital organs. I will visit the place with my team and initiate an awareness campaign with the help of locals to discourage the practice and make women aware about the best ways of easy conception and seeking blessing from the Goddess. We will ensure that their religious sentiments aren’t hurt," Nayak was quoted by TOI as saying.

(The above story first appeared on LatestLY on Nov 22, 2020 10:05 PM IST. For more news and updates on politics, world, sports, entertainment and lifestyle, log on to our website latestly.com).