"This was nothing short of a deliberate and motivated attempt to outrage religious sentiments of members of the Hindu community using deliberately falsified videos," the Congress said. 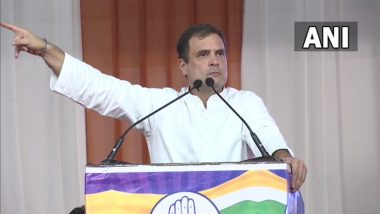 New Delhi, September 30:  Delhi Congress has filed a complaint against film director Ashok Pandit for allegedly spreading fake and distorted news about Rahul Gandhi. In the complaint filed on Thursday, the party said Pandit incited, provoked the public, thereby creating enmity between groups, and such offences are punishable under the IPC 1860 and other legal provisions. Pandit had tweeted which he deleted later: "Janaudhari Rahul Gandhi refusing to perform Aarti! The reason is clear!"

Delhi Congress alleged that the tweet was accompanied with maliciously distorted and clipped video of Rahul Gandhi, "wherein it was sought to portray Shri. Rahul Gandhi as refusing to partake in religious rituals being performed in Rajkot (Gujarat) while worshipping goddess Durga. It must be pointed out that the video was created by morphing (through deliberately editing) an older video in which Shri Rahul Gandhi was indeed offering prayers in direct contradiction to what was being portrayed by Ashok Pandit. 29/09/22." Rahul Gandhi Says Congress Will Adhere to ‘One Man One Post’; Big Hint for Ashok Gehlot, Relief for Sachin Pilot

The party said the impression that was sought to be conveyed from the mischievously captioned post and accompanying distorted video clip, was that Rahul Gandhi had refused to perform a sacred ritual during a religious ceremony and in doing so had offended the sentiments of other members of the Hindu community.

"This was nothing short of a deliberate and motivated attempt to outrage religious sentiments of members of the Hindu community using deliberately falsified videos," the Congress said. Congress Leader Rahul Gandhi Bats for Opposition Strategy To Tackle ‘Divisive Forces’

In a tweet on Friday, Congress spokesperson Jairam Ramesh said, "Last night, a police complaint was filed in Delhi against a totally fake video on Rahul Gandhi. The offender deleted his social media post after it was exposed, but he will face the law for his atrocious deed. We will not allow such people to get away lightly."

(The above story first appeared on LatestLY on Sep 30, 2022 11:15 AM IST. For more news and updates on politics, world, sports, entertainment and lifestyle, log on to our website latestly.com).