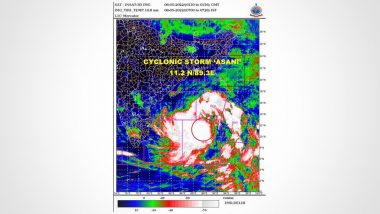 New Delhi, May 8: A deep depression over southeast Bay of Bengal has intensified into cyclonic storm 'Asani' on Sunday after it moved west-northwestwards with a speed of 16 kmph, the India Meteorological Department (IMD) said. At 5.30 a.m., Asani lay centred over southeast Bay of Bengal about 450 km west-northwest of Car Nicobar (Nicobar Islands), 380 km west of Port Blair (Andaman Islands), 970 km southeast of Visakhapatnam (Andhra Pradesh) and 1,030 km south-southeast of Puri (Odisha).

"It is very likely to move northwestwards and intensify further into a severe cyclonic storm over the east-central Bay of Bengal during next 24 hours. It is very likely to continue to move northwestwards till May 10 evening and reach west-central and the adjoining northwest Bay of Bengal off north Andhra Pradesh and the Odisha coasts," said the IMD. Cyclone Asani Won’t Make Landfall in Odisha or Andhra Pradesh but Move Parallel to Coast, Says IMD.

Then, instead of crossing over to land across the Odisha or Andhra coast, it is very likely to recurve north-northeastwards and move towards the northwest Bay of Bengal off the Odisha coast, it added. A number of places across Andaman and Nicobar Islands have received heavy to very heavy rainfall. Sea conditions would be choppy and fishermen have been warned not to venture out into the rough waters.

(The above story first appeared on LatestLY on May 08, 2022 11:37 AM IST. For more news and updates on politics, world, sports, entertainment and lifestyle, log on to our website latestly.com).