Cyclone Yaas May Impact Assam, Meghalaya and Sikkim on May 26 and 27, Say IMD Officials

Assam Chief Minister Himanta Biswa Sarma, in a tweet, said : "Cyclone 'YAAS' is likely to affect the (northeastern) region on 26-27 May. Hon'ble UHM Amit Shah called and enquired about preparedness of Assam, Sikkim and Meghalaya. 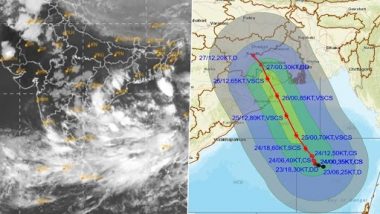 Guwahati/Agartala, May 24: Cyclone 'Yaas' is likely to affect three northeastern states - Assam, Meghalaya and Sikkim - causing moderate to heavy rains on May 26-27, IMD officials said on Monday. India Meteorological Department (IMD) officials said that the intensity of rain depends on the cyclone movements.

Assam Chief Minister Himanta Biswa Sarma, in a tweet, said : "Cyclone 'YAAS' is likely to affect the (northeastern) region on 26-27 May. Hon'ble UHM Amit Shah called and enquired about preparedness of Assam, Sikkim and Meghalaya.

"Informed that emergency services have been pressed into action. Grateful, to Hon'ble UHM for his continued concern for the region." IMD Director in Tripura Dilip Saha said that light to moderate rain is likely to occur in many states of the northeastern region. Cyclone Yaas Likely to Be More Severe Than Amphan, May Affect 20 West Bengal Districts, Says CM Mamata Banerjee.

"In few places in the region might witness heavy rain. However, the rain and wind speed of the Cyclone 'Yaas' would depend on the strength and direction of the storm," Saha told IANS.

Meanwhile, in view of latest advisory of the IMD, eight teams of the National Disaster Response Force (NDRF) in Guwahati were airlifted to Odisha for search and rescue operations. NDRF 1st Battalion Commandant H.P.S. Kandari said that the Odisha government had requisitioned more than 50 teams of the NDRF while West Bengal governemnt requested 35 teams. Teams from NDRF battalions in Assam and Bihar are being airlifted to Odisha and West Bangal in addition to those from the battalions stationed in these states.

(The above story first appeared on LatestLY on May 24, 2021 11:43 PM IST. For more news and updates on politics, world, sports, entertainment and lifestyle, log on to our website latestly.com).