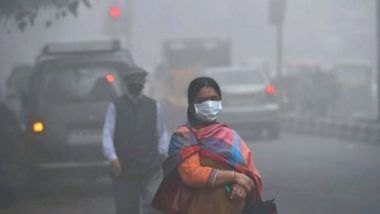 New Delhi, March 5: Delhi has topped the list of the most polluted capital in the world while Gurugram has been ranked as the most polluted city in a recent study conducted by environment NGO Greenpeace India. According to reports, the national capital has been ranked first among 62 polluted cities in the report, Global Air Pollution 2018, a statement from the organisation stated. The report, which will be officially out on Tuesday, measures the air quality in terms of PM2.5 data as aggregated through the IQAir AirVisual platform in 2018. Delhi Air Pollution: Rising Vehicular Emission a Major Contributor in Deteriorating Air Quality in NCR.

100 years of #climate anomalies in 15 seconds. Wait until the end... There is no more time to wait. We must act on #climatechange NOW. pic.twitter.com/7Ec8mZpdIc

"The real-time status of all included locations, together with many more, can also be explored through the IQAir AirVisual Air Quality Map, which brings together live air quality readings in one accessible place," the NGO said. The report said is based on air quality data collected in 2018 from public monitoring sources. The report stated that these sources include government monitoring networks as well as validated data from air quality monitors operated by private individuals and organisations.

(The above story first appeared on LatestLY on Mar 05, 2019 12:52 PM IST. For more news and updates on politics, world, sports, entertainment and lifestyle, log on to our website latestly.com).