A video released by news agency ANI showed that the vehicles were moving through dense fog in the national capital while people continued to experience the winter chills. 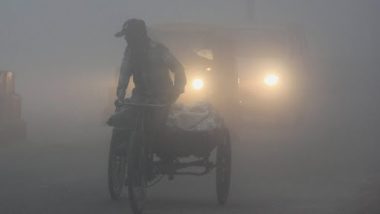 New Delhi, February 8: Dense fog continued to engulf parts of Delhi on Monday with temperature settling at 9.6 degree Celsius during the morning hours, the India Meteorological Department (IMD) said. A video released by news agency ANI showed that the vehicles were moving through dense fog in the national capital while people continued to experience the winter chills. On Saturday, Delhi's minimum temperature increased slightly to 7.4 degrees Celsius. The IMD had said that the temperature was likely to remain within comfortable levels for the next three to four days. La Nina in India: Country to Witness More Cyclones, Relatively Colder Winter This Year, Says IMD.

On Friday, Delhi's minimum temperature dropped to 6.8 degrees Celsius on due to cold, dry winds blowing in from snow-laden western Himalayas, the India Meteorological Department said. The city had recorded 2.1 mm rainfall on Thursday under the influence of Western Disturbance which also led to widespread snowfall in the hilly region. "Cold, dry winds from the mountains have started blowing towards the plains, resulting in a dip in the minimum temperature," an IMD official said.

#WATCH: A dense layer of fog continues to engulf Delhi in the morning. Visuals from Burari this morning. pic.twitter.com/Q0wib0BUkl

(The above story first appeared on LatestLY on Feb 08, 2021 09:34 AM IST. For more news and updates on politics, world, sports, entertainment and lifestyle, log on to our website latestly.com).