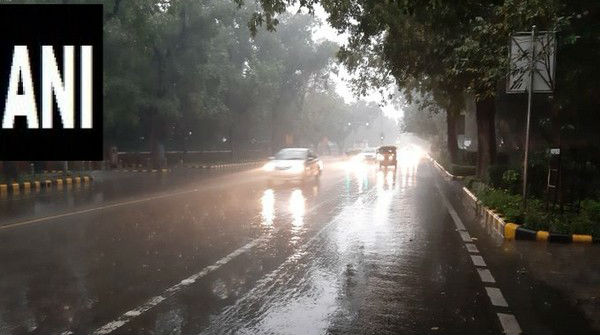 New Delhi, January 8: As the national capital receives rains, the air quality has improved during the last 48 hours and there is a gradual decrease in the level of pollution due to ongoing scattered rain, said Skymet on Wednesday. According to the weather forecasting agency Skymet, the weather will clear up by evening hours as the western disturbance will move away.

An official from the India Meteorological Department (IMD) said, rains are expected tonight as well across the national capital and the weather is likely to clear by tomorrow morning. North India Fog: Railway Services Affected, 16 Delhi-Bound Trains Face Up to 8-Hour Delay Due to Low Visibility.

"The sky will remain partly cloudy tomorrow and moderate fog is expected in the morning. The air quality is likely to improve in coming days due to the rainfall."The maximum and minimum temperature will hover at 16 degrees Celsius and 9 degrees Celsius tomorrow, added the official.

"During the last 48 hours, national capital's air quality has improved and there is a gradual decrease in the pollution level due to the ongoing scattered rain and thundershower activities over the northern plains as well as in the Delhi and NCR," said Skymet.

This improvement is expected to last for another two days. Thereafter, the pollution level will increase gradually once again and may get 'poor' from 'very poor' category. Delhi and adjoining areas received light rains on Wednesday morning and afternoon as well. Traffic snarls were witnessed at several junctions and major arteries causing trouble for the commuters.

"The sky may remain cloudy to partly cloudy until tomorrow morning. We expect wind direction will also change from easterly to westerly and northwesterly, leading to a significant drop in the minimums of Delhi NCR and most parts of northern plains," said Skymet. Dense Fog Disrupts Train Services in North India, 19 Delhi-Bound Trains Delayed Due to Low Visibility.

"This drop will be short-lived as another western disturbance will approach the western Himalayas around January 11, which will once again change the wind direction and increase minimums," Skymet added. According to the IMD, Delhi's temperature was recorded at 14 degree Celsius at around 5:30 pm on Wednesday.