Police in Dombivali arrested a 32-year-old man on Friday for sexually abusing a dog. The accused was identified as Ramsamojh Chauhan. 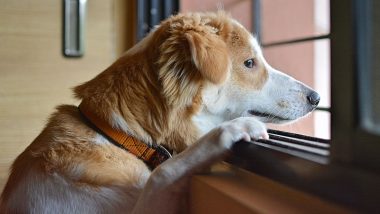 Dombivali, December 19: Police in Dombivali arrested a 32-year-old man on Friday for sexually abusing a dog. The accused, identified as Ramsamojh Chauhan, was booked for animal cruelty and unnatural sex. The arrest came after a member of People for Animals (PFA) group lodged a complaint at the Vishnunagar police station against Chauhan for sexually abusing the dog. Mumbai Beastiality Case: Male Stray Dog Gangraped by Four Inebriated Men in Malad’s Malwani, Left Seriously Injured.

The PFA member submitted a video in which Chauhan was seen sexually abusing the dog at the creek area in Dombivali (west) on December 13, according to a TOI report. Based on the evidence, police arrested the accused and registered a case for animal cruelty and unnatural sex against him. In an unrelated incident, a 40-year-old watchman was booked in Ulwe for brutally hitting an old female dog, resulting in a broken jaw. Female Dog Sexually Abused at Mumbai's Nerul Railway Station, Accused Arrested.

Police booked watchman of Sunny Arcade building, M Rakesh under section 429 of the Indian Penal Cose and under the Prevention of Cruelty to Animals Act, 1960. Rakesh hit the dog with a stick after it entered the Sunny Arcade complex. The seriously injured dog has been admitted to the Turbhe centre of Bhumi Jeevdaya NGO.

"A local animal lover in Ulwe, Sonam Sonawane, had recently noticed an injured dog continuously crying in pain. After asking a few persons around, it was learnt that the dog was hit on the face and jaw by a watchman called M Rakesh of Sunny Arcade building in sector 23. We, therefore, lodged an FIR against Rakesh," activist Vijay Rangare was quoted as saying.

The accused watchman has not been arrested. Meanwhile, Rangare is also trying to contact the security agency which had employed Rakesh, so as to ensure that his service is suspended in Ulwe.

(The above story first appeared on LatestLY on Dec 19, 2020 10:22 AM IST. For more news and updates on politics, world, sports, entertainment and lifestyle, log on to our website latestly.com).