Trump, accompanied by wife Melania Trump and a high-level delegation, will arrive in Ahmedabad around noon on February 24 for a little less than 36-hour-long trip. From Ahmedabad, he will travel to Agra before arriving at the national capital for the main leg of the visit. 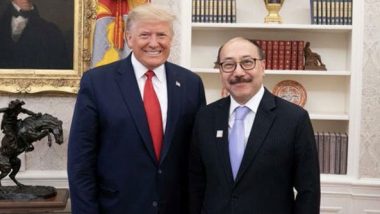 New Delhi, February 19: US President Donald Trump and his delegation will be treated to India's rich and diverse cultural heritage during his visit to Ahmedabad in a manner that has few parallels in the country or elsewhere, Foreign Secretary Harsh Vardhan Shringla said on Wednesday.

Trump, accompanied by wife Melania Trump and a high-level delegation, will arrive in Ahmedabad around noon on February 24 for a little less than 36-hour-long trip. From Ahmedabad, he will travel to Agra before arriving at the national capital for the main leg of the visit. Donald Trump India Visit: PM Narendra Modi and US President to Hold Key Talks on Trade and Defence on February 25.

"It will be similar to the landmark 'Howdy, Modi!' event hosted by the Indian-American community in honour of Prime Minister Modi during his visit to Houston in September 2019, in which President Trump participated," Shringla said, briefing reporters on the visit.

He said the route of Trump's travel to the stadium is expected to have tens of thousands of citizens as well as artistes showcasing the performing arts from different states and Union Territories. Shringla said as many as 28 stages representing the various parts of the country are being set up along the route, in what is being called the India Road Show.

"The route will also feature decorations depicting different events in the life of Gandhiji, whose association with the city is so well-known," said the foreign secretary. He said Trump and Modi would address a full-capacity audience, which would include people from different parts of India and all walks of life, reflecting the diversity of the country.

After the event, the US President and the First Lady would visit Agra, where they would spend about an hour at the Taj Mahal before the sunset, according to Shringla. President Trump would then depart for Delhi. On the morning of February 25, Trump and the First Lady would be accorded a ceremonial welcome at the forecourt of the Rashtrapati Bhavan.

From there, they would go to Rajghat to pay homage at the 'samadhi' of Mahatma Gandhi. It would be followed by restricted and delegation-level talks between Trump and Modi at Hyderabad House. "The talks will be comprehensive and cover issues relating to our strategic partnership in areas of defence, security, counter-terrorism, as well as trade, energy, people-to-people exchanges and other bilateral matters," Shringla said.

He said the two leaders would exchange views on regional and global issues of shared interests. Prime Minister Modi would host a lunch for the US president following the talks. In the afternoon, Trump is expected to attend certain private events at the US Embassy, including a private roundtable with industry representatives.

In the evening, the US president will meet with President Ram Nath Kovind at the Rashtrapati Bhavan. A banquet will be hosted by Kovind. President Trump would depart from India later that evening, said Shringla.

"President Trump's visit will be brief but intense, with all essential elements of a State visit, and two additional legs in Ahmedabad and Agra, all squeezed into less than 36 hours," he added. He said ties between India and the US has evolved to one of the "most consequential" relationships today and both countries have unprecedented convergence of interests. Donald Trump India Visit: Walls Opposite Motera Stadium in Ahmedabad Painted With Images And Slogans of PM Narendra Modi & US President, View Pics.

"It is a strategic partnership based on shared values and geared towards the 21st century. Whether in countering terrorism or in ensuring a peaceful and prosperous Indo-Pacific, India and the US have unprecedented convergence of interests," said Shringla.