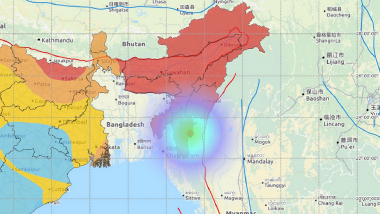 Aizawl, July 28: Another earthquake was reported in Mizoram on Tuesday, marking the 24th instance of tremors in the Northeastern state in the past six weeks. The quake felt today was stated to be of low-to-mild intensity, as per the preliminary reports. No damage to properties or loss of lives was reported.

According seismic agencies, the magnitude of earthquake was measured as 4.4 on the richter scale. The tremors originated from a point close to the significantly inhabited region of Champhai. Earthquake in Himachal Pradesh: Quake Measuring 3.1 on Richter Scale Hits Chamba.

"An earthquake of magnitude 4.4 struck 27 km South South-West of Champhai, Mizoram at 08:08 pm today," said a statement issued by the National Centre for Seismology (NCS).

The last earthquake in Mizoram was reported on July 24, when 3.8 magnitude tremors were felt in southeast of Champhai. While the quake was not fatal, it led to landslides in the region which caused some damage to properties.

At least two buildings were evacuated and water supply was hit as the supply pipeline to Dungtlang village was damaged due to landslides, Champhai Deputy Commissioner Maria CT Zuali had said.

(The above story first appeared on LatestLY on Jul 28, 2020 08:58 PM IST. For more news and updates on politics, world, sports, entertainment and lifestyle, log on to our website latestly.com).