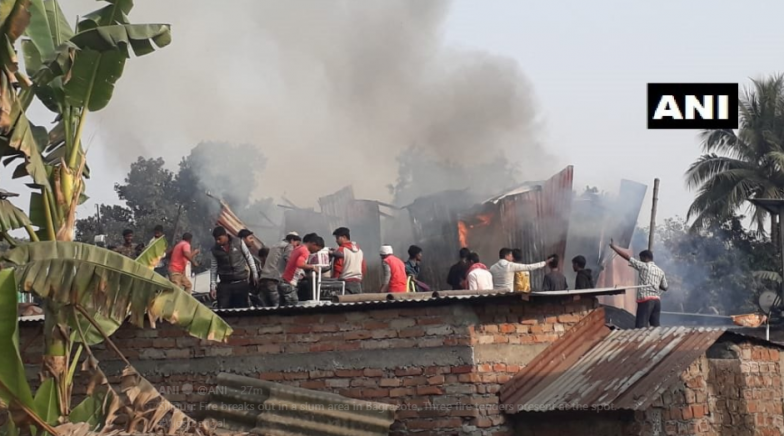 Bagracote, January 9: A huge fire broke out in a slum area in Bagracote of West Bengal's Siliguri on Wednesday afternoon. Three fire tenders rushed to the spot to control the blaze. No casualties have been reported so far. However, the exact cause of the fire is yet to be ascertained. Nagpur: Huge Fire Erupts at Sancheti Hospital Building, People Feared Trapped.

The visuals from the incident spot of the fire were shared by news agency ANI, which also tweeted pictures from the rescue operations. Have a look at the pictures below in the tweet:

Siliguri: Fire breaks out in a slum area in Bagracote. Three fire tenders present at the spot. #WestBengal pic.twitter.com/FDPrByCoAx

Earlier on December 27, Metro services were disrupted in Kolkata after smoke was detected from the metro train. According to reports, the fire broke out when the metro was passing through an underground tunnel between Maidan and Rabindra Sadan station. In the panic, passengers tried to broke windows. Some of the commuters also fainted due to smoke. After the condition was under control, 16 passengers were taken to the nearby hospital.

Meanwhile, a massive fire broke out in a newly-constructed building in Maharashtra's Nagpur on Wednesday afternoon. According to initial reports, people are feared trapped in the hospital premises, where, the fire broke out. No casualty has been reported yet. Five fire tenders were present at the spot to douse the fire. Meanwhile, a rescue operation was underway.