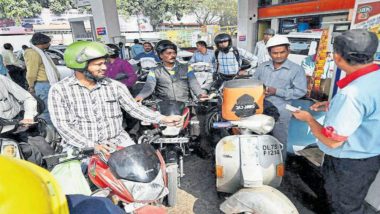 Meanwhile, diesel is priced at Rs 72.27 per litre in Mumbai, Rs 68.92 per litre in Delhi, Rs 71.29 per litre in Kolkata and Rs 72.83 per litre in Chennai. Fuel Price Hike: Twitterati Voice Displeasure as Petrol Prices Hover Around Rs 75 Per Litre.

The price of petrol and diesel is changed by oil marketing companies on a daily basis. Since June 2017, fuel prices in India are revised daily at 6 am every day. At present, the US-Iran geopolitical tensions has aconsequential impact on the oil prices.

Previously, the prices were revised every fortnight. Several factors that closely impact the price of fuel include rupee to US dollar exchange rate, cost of crude oil, global cues and international crude oil prices gain. According to a report by IANS, the first phase of the trade deal between the US and China is going to be signed on January 15. Experts believe that due to this agreement many commodity markets will show an enhanced activity, but the price of fuel oil is unlikely to get much support.

(The above story first appeared on LatestLY on Jan 16, 2020 10:43 AM IST. For more news and updates on politics, world, sports, entertainment and lifestyle, log on to our website latestly.com).