The counting of votes for 576 seats in 144 wards across six civic bodies - Ahmedabad, Surat, Rajkot, Vadodara, Bhavnagar and Jamnagar- is underway. 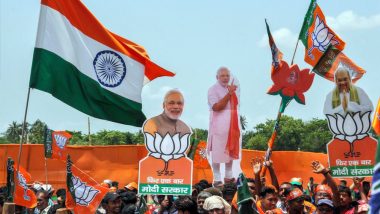 Gujarat, February 23: The Bharatiya Janata Party (BJP) retained power in Gujarat by winning in all the six municipal corporations in the Gujarat Civic Polls 2021. The BJP won a whooping 485 seats of the 576 seats where the counting of votes was held for 576 seats in 144 wards across six civic bodies - Ahmedabad, Surat, Rajkot, Vadodara, Bhavnagar and Jamnagar. All these civic bodies are ruled by the Bharatiya Janata Party (BJP).

According to the latest update, the BJP has won 484 seats, while Congress managed to bag 54 seats in the municipal corporation polls. The Aam Aadmi Party (AAP) won 27 seats in the local body polls while the AIMIM managed to win in 7. The BSP bagged 3 seats while the Independents settled for 1 seat.

The municipal corporation elections in Ahmedabad, Surat, Vadodara, Rajkot, Bhavnagar and Jamnagar was believed to be a test for Chief Minister Vijay Rupani as it may set the tone for the Assembly polls slated for next year. Gujarat Civic Poll Results 2021 Live Streaming on TV9 Gujarati: Watch Live Telecast of Outcome of Elections For Ahmedabad, Surat, Rajkot and Other Municipal Corporations.

Counting of votes for 576 seats in 144 wards across 6 civic bodies will be held today:

Counting of votes for Gujarat local body elections to be held today; visuals from outside a counting centre in Surat pic.twitter.com/P7IBgcsqrL

Ahmedabad recorded the lowest turnout of 42.51 per cent, while Jamnagar saw the highest turnout of 53.38 per cent, followed by 50.72 per cent in Rajkot, 49.46 per cent in Bhavnagar, 47.84 per cent in Vadodara and 47.14 per cent in Surat. Of the total 1.14 crore voters registered in these major cities of Gujarat, 52.83 lakh had cast their ballots, the SEC mentioned in a release.

(The above story first appeared on LatestLY on Feb 23, 2021 10:33 AM IST. For more news and updates on politics, world, sports, entertainment and lifestyle, log on to our website latestly.com).