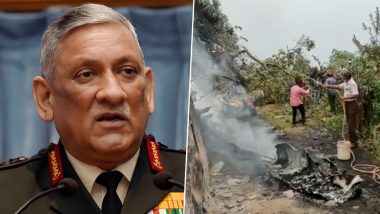 The bodies of General Rawat and his wife are expected to reach Delhi by today evening. Their last rites will be performed tomorrow with full military honours. The chopper took off from Sulur Airbase at around 11:45 am on Wednesday. General Rawat was heading to Wellington to address a gathering at the Defence Services Staff College. IAF Chief Air Chief Marshal VR Chaudhary also visited the crash site this morning. PM Narendra Modi Mourns CDS General Bipin Rawat’s Death, Says ‘India Will Never Forget His Exceptional Service’.

The IAF has ordered a tri-services inquiry into the incident. Earlier today, Defence Minister Rajnath Singh addressed Parliament over the incident. The Defence Minister said that the probe will be headed by Air Marshal Manavendra Singh. He added that the IAF inquiry team had reached Wellington on Wednesday and had already started investigations. The Lok Sabha also observed a two-minute silence on the demise of the 13 people. Final Moments of Mi-17 Chopper Carrying CDS Bipin Rawat and 13 Others Before It Crashed (Watch Video).

After the crash, Prime Minister Narendra Modi chaired the Cabinet Committee on Security (CCS). During the meeting, it was decided that as a mark of respect, the government will announce national mourning on Thursday. Singh, Home Minister Amit Shah and top military, security and intelligence officers attended the meeting.

(The above story first appeared on LatestLY on Dec 09, 2021 12:30 PM IST. For more news and updates on politics, world, sports, entertainment and lifestyle, log on to our website latestly.com).