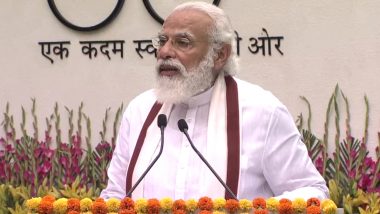 New Delhi, August 12: The Income Tax (I-T) Department has issued instructions for mandatory attendance of officers to view the web telecast of Prime Minister Narendra Modi's address to I-T officers and taxpayers on Thursday. An instruction to this effect issued by the Principal Chief Commissioner of Income Tax, Chennai, was accessed by IANS. "I have been directed to request that all Principal Commissioners/Commissioners of Income Tax Act stationed at Chennai are requested to attend the web telecast without fail," said the circular.

The web telecast will take place in the Aayakar Bhavan in Chennai as the PM is scheduled to address senior officers of the Income Tax Department through a web telecast on Thursday. As per the programme, Prime Minister will launch the platform for "Transparent Taxation -- Honouring the Honest" via video conferencing. Income Tax Calculator Launched Online by I-T Department; Here's How You Can Calculate Your Tax Under New And Old Regime.

The CBDT has carried out several major tax reforms in direct taxes in the recent years. Last year the corporate tax rates were reduced from 30 per cent to 22 per cent and for new manufacturing units, the rates were reduced to 15 per cent. Also, the dividend distribution tax was abolished.

The focus of the tax reforms has been on reduction in tax rates and on simplification of direct tax laws. Several initiatives have been taken by the CBDT for bringing in efficiency and transparency in the functioning of the I-T Department.

Similarly, to increase the ease of compliance for taxpayers, the I-T Department has moved forward with prefilling of income tax returns to make compliance more convenient for the individual taxpayers. Compliance norms for startups have also been simplified, according to an official statement.

(The above story first appeared on LatestLY on Aug 12, 2020 10:33 PM IST. For more news and updates on politics, world, sports, entertainment and lifestyle, log on to our website latestly.com).