India And China Should be Partners, Rather Than Rivals, Must Find Solutions For Border Disputes Through Negotiations, Says Chinese Envoy Sun Weidong 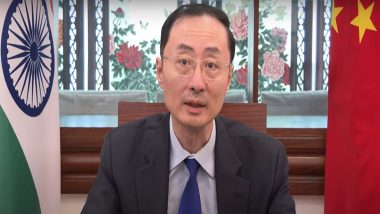 New Delhi, July 10: India and China must find a solution for long-pending border disputes through peaceful negotiations, said Chinese Ambassador to India Sun Weidong on Friday. In a video statement on India-China relations, Sun Weidong also accused a section of Indians of "disrupting" bilateral relationship between the two neighbours in the wake of the "Galwan valley incident" that happened on June 15. India-China Stand-Off: Disengagement Between Troops of India & China Completed at Patrolling Point 15, Chinese Army Moves Back by 2 km.

"On June 15, there was an incident causing casualties at the Galwan Valley in the western sector of the China-India border. It was a situation neither China nor India would like to see... At the backdrop of what recently happened at the Galwan Valley, some quarters in India raise doubts about the consensus reached by the two leaders, and have wrong perception of the direction of China-India relations. These have brought disruptions to the bilateral relationship," Weidong said. China Must Stop Building New Structures to End Stand-Off With India Along LAC: Indian Envoy.

Pitching for dialogues to resolve conflicts between China and India, the Chinese envoy said: "As two major neighbouring countries, it is natural that China and India may have some differences. We have been holding dialogues and negotiations to manage differences. China and India have the boundary question left over by history, which is sensitive and complicated. We need to find a fair and reasonable solution mutually acceptable through equal consultation and peaceful negotiation."

On June 15, troops of India and China had a face-off in Galwan valley in Ladakh during which 20 Indian soldiers were martyred. The incident had triggered tensions between the two neighbours. The situation improved after Special Representatives of India and China on the boundary talks - National Security Advisor Ajit Doval and Wang Yi, Chinese State Councillor and Minister of Foreign Affairs - had a phone conversation on July 5.

According to India's Ministry of External Affairs (MEA), during the conversation, Doval conveyed categorically India's position on the recent developments along the Line of Actual Control (LAC) including in the Galwan valley area. Subsequently, the disengagement of troops from both sides began. The Chinese People's Liberation Army troops have pulled back from Galwan Valley, Patrolling Point 15 and Hot Springs.

Asserting that India and China should see each other as partners and nor rivals, Weidong opined: "Since the 1990s, China and India have reached an important consensus that the two countries pose no threat to each other. During Wuhan Informal Summit in 2018, President Xi Jinping and Prime Minister Narendra Modi once again stressed that the two countries provide each other with development opportunities instead of posing threats, which the two sides should adhere to."

(The above story first appeared on LatestLY on Jul 10, 2020 04:21 PM IST. For more news and updates on politics, world, sports, entertainment and lifestyle, log on to our website latestly.com).