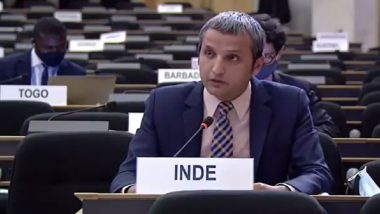 Geneva, September 24: Pakistan, the epicentre of global terrorism, is violating every single international treaty and declaration on human rights, India said on Thursday at the United Nations Human Rights Council (UNHRC). Vimarsh Aryan, a First Secretary at India's UN mission, made these remarks exercising India's Right of Reply in response to Pakistan at the UNHRC in Geneva. Jammu and Kashmir: India, Pakistan Trade Heavy Fire on LoC in Bandipora District.

"Pakistan, and a strong proponent of mono-ethnic culture and mono-ethnic dominance, is violating every international treaty and declaration on human rights," Vimarsh Aryan said. "Pakistan's sole objective as a member of this council is to distract the attention of international community from serious human rights violations committed by it against its own people and in Indian territories occupied by it," he added. US Ambassador to Pakistan William Todd Says ‘Islamabad Must Take Sustained and Irreversible Action Against Terrorism’.

"During this pandemic, when everyone is putting on a mask for the safety and protection of fellow human beings, Pakistan, unfortunately, is using another kind of pernicious mask to masquerade as a champion of human rights that it itself violates by torturing and persecuting minorities," Aryan said.

#WATCH "The Pakistani shenanigan of running with the hare and hunting with the hound is hard to miss," Vimarsh Aryan, First Secretary, MEA, exercises India's Right of Reply in response to Pakistan at the United Nations Human Rights Council (UNHRC) in Geneva, Switzerland pic.twitter.com/jW0TG6OpYa

India Hits Out at Pakistan at SAARC:

Without mentioning Pakistan, Jaishankar urged the member states "to collectively resolve to defeat the scourge of terrorism, including the forces that nurture, support and encourage an environment of terror and conflict, which impede the objective of SAARC to realise its full potential for collective collaboration and prosperity across South Asia".

(The above story first appeared on LatestLY on Sep 24, 2020 07:00 PM IST. For more news and updates on politics, world, sports, entertainment and lifestyle, log on to our website latestly.com).