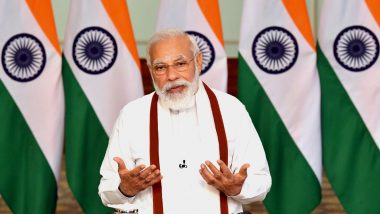 New Delhi, August 7: India, under the Prime Minister Narendra Modi-led government, gave a befitting response to China in recent skirmishes, said 69 percent respondents in a survey released on Friday. According to Mood of The Nation survey, conducted by India Today news channel, 59 percent of respondents said India should go to war with China and a whopping 72 percent believe India can defeat China. All-Party Meet: PM Narendra Modi Says China 'Neither Intruded Into Indian Territory Nor Occupied Any Post'.

During a face-off with Chinese troops in Galwan valley in eastern Ladakh on June 15, 20 Indian soldiers were martyred. The Ministry of Defence, in its report which is no longer available on its website, acknowledged that China had intruded into Indian territory. Following National Security Advisor Ajit Doval's intervention, disengagements of troops from various locations by both the sides have been underway. PM Has Surrendered Indian Territory to Chinese Aggression: Rahul Gandhi.

Asked how the economic condition has changed since Narendra Modi took reins of the country, 48 percent said it improved, whereas 42 percent believe it deteriorated. "When asked, if the government should spend more on healthcare or defence, majority people polled said that they would like the government to spend on both, while 23 per cent backed more investments in the healthcare sector," India's Today's Mood of the Nation survey said.

Following the face-off with Chinese troops in Galwan, the Indian government banned several Chinese apps, including TikTok. Asked whether the move was right, 91 percent of those surveyed responded in affirmative. As many as 67 percent also said they are to pay more in order to boycott Chinese products.

(The above story first appeared on LatestLY on Aug 07, 2020 09:01 PM IST. For more news and updates on politics, world, sports, entertainment and lifestyle, log on to our website latestly.com).