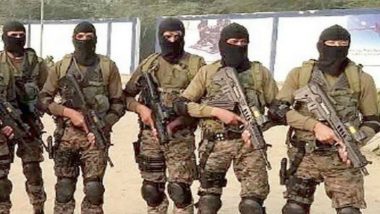 New Delhi, September 28: The Union Defence Ministry has approved a proposal to purchase 72,000 Sig Sauer assault rifles from the US at a cost of around Rs 780 crore. The Defence Acquisition Council led by Defence Minister Rajnath Singh on Monday approved proposals for capital acquisition of various equipment required by the Indian armed forces at an approximate cost of Rs 2,290 crore.

These include procurement from the domestic industry as well as foreign vendors. To equip the frontline troops of the Army, the council has accorded approval for the procurement of 72,000 Sig Sauer assault rifles at a cost of around Rs 780 crore. Defence Ministry Approves Acquisition of Arms, Military Equipment Worth Rs 2,290 Crore.

Under the 'Buy Indian' category, the council has approved the procurement of Static HF Tans-receiver sets and smart anti-airfield weapons. The HF radio sets will enable seamless communication for the field units of the Army and the Air Force. They are being procured at a cost of Rs 540 crore. Rs 90,048 Crores Allocated for Defence Modernisation in 2020-21.

The smart anti-airfield weapons being procured at cost of Rs 970 crore will add to the fire power of the Navy and the Air Force. Earlier, the Indian Army had received the first lot of Sig Sauer assault rifles to boost its counter-terrorism operations. India had acquired the rifles under the fast-track procurement programme. The new rifles will replace the existing Indian small arms system (Insas) 5.56x45 mm rifles used by the forces and manufactured locally by the Ordnance Factories Board.

(The above story first appeared on LatestLY on Sep 28, 2020 11:18 PM IST. For more news and updates on politics, world, sports, entertainment and lifestyle, log on to our website latestly.com).