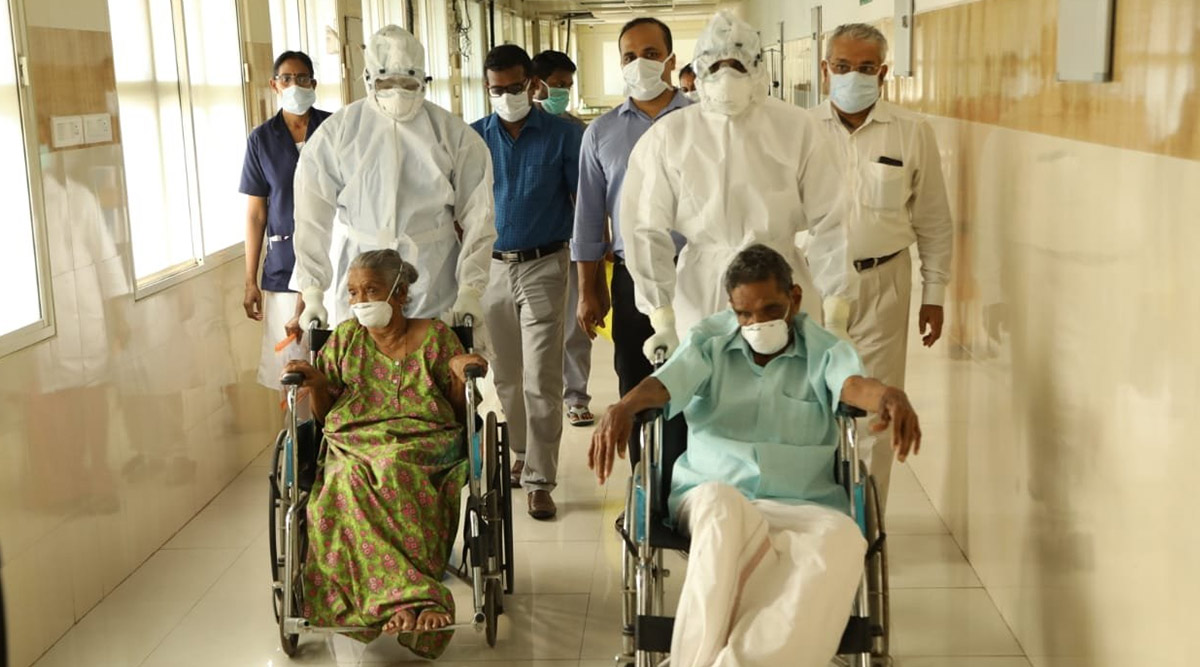 93-Year-old man and his wife discharged from hospital in Kerala (Photo Credits: ANI)

Kottayam, April 3: In what can be considered as “miracle cure”, a 93-year old man, India's oldest coronavirus survivor, and his wife were discharged from the government Medical College Hospital in Kottayam district of Kerala on Friday. Thomas Abraham and his 88-year old wife Mariyamma were admitted to the hospital on March 9. They were discharged from the hospital, days after recovering from COVID-19.  Coronavirus Age-Wise Mortality Rate: Why Patients Below 40 Years of Age Should Worry Less About COVID-19 Outbreak.

"They are fine now. The decision to discharge them was taken after their latest sample test also turned negative for coronavirus," a state government official said. Along with the seven-member team of doctors who led the treatment, 40 medical staff, including 25 nurses also actively took part in various stages of treatment of the couple.

Kerala: A couple in Kottayam, 93-year-old Thomas and 88-year-old Thresyamma, who were #COVID19 positive were discharged from Medical College Kottayam today after they recovered. pic.twitter.com/4PNOWDvu8w

The couple hails from Ranni village in Pathanamthitta district of the state. Abraham is a farmer by profession. They had contracted the virus from their son, daughter-in-law and grandson who returned from Italy last month. All three have also recovered fully. Catch Live Updates of Coronavirus Here:

Earlier in the day, the first health worker infected with COVID-19 was also discharged from a hospital. She is now ready to work after 14 days of isolation post-recovery. Kerala Health Minister Shailaja shared the news on her twitter handle. She tweeted, “Kerala was anxious when its first health worker was infected with COVID-19. The health worker has now recovered and ready to get back to work after her 14-day isolation post-recovery.” In Kerala , 286 positive cases of coroanvirus have been reported so far.  Two deaths were also reported in the state. Meanwhile, 27 people have also recovered until now,

Kerala was anxious when its first health worker was infected with COVID-19. The health worker has now recovered and ready to get back to work after her 14 day isolation post recovery.#IndiaFightsCorona #Covid19Kerala #Covid19India pic.twitter.com/7y4yTPTcZX

On Friday, a 99-year-old woman from the United Kingdom became the oldest COVID-19 survivor in the country. According to reports, Rita Reynolds was tested positive for coronavirus on March 25. Doctors also lost hope, and Reynold’s family was asked to prepare for the worst. However, the dedicated medical staff of Abbeyfield care home in Bramhall near Stockport with their persistent efforts successfully treated the 99-year-old lady.