India's Status Declines From 'Free' to 'Partly Free' in Freedom House's 'The World Report 2021', Global Freedom Score Reduces from 71 to 67

In the report titled 'Freedom in the World 2021' by the Freedom House, India under the Narendra Modi-led NDA rule, has scored a 34 out of 40 on Political rights parameter and 33 out of 60 on Civil liberties parameters, averaging its overall score to a 67 out of 100 and falling into a 'Partially Free' category. 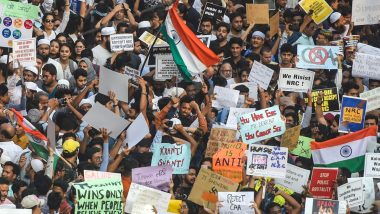 New Delhi, March 4: Freedom House, the US based NGO that conducts worldwide research on democracy, political freedom, and human rights, has downgraded India's freedom status from 'free' to 'partially free.' In its report titled 'Freedom in the World 2021,' India under the Narendra Modi-led NDA rule, has scored a 34 out of 40 on Political rights parameter and 33 out of 60 on Civil liberties parameters, averaging its overall score to a 67 out of 100 and falling into a 'Partially Free' category.

The report states,"India’s status declined from Free to Partly Free due to a multiyear pattern in which the Hindu nationalist government and its allies have presided over rising violence and discriminatory policies affecting the Muslim population and pursued a crackdown on expressions of dissent by the media, academics, civil society groups, and protesters." Deepender Hooda Slams Freedom House For Using Incomplete India Map Without Jammu and Kashmir And Ladakh.

It adds that despite being a multiparty democracy, the ruling regime "presided over discriminatory policies and increased violence affecting the Muslim population." The report also observed that the "harassment" of journalists, activists, NGOs and other government critics "has increased significantly" in India. Global Hunger Index 2020: India Ranks 94 in List; Experts Blame Poor Implementation, Siloed Approach.

Freedom House, in its report, has been fairly critical of treatment of Muslims in India especially under NDA rule. It states ,"a number of Hindu nationalist organizations and some media outlets promote anti-Muslim views, a practice that the government of Prime Minister Modi has been accused of encouraging."

The report also observed that the freedom of academia and universities have been under threat. It said," Members of the student wing of the Hindu nationalist organization Rashtriya Swayamsevak Sangh (RSS)—from which the ruling BJP is widely regarded to have grown—have engaged in violence on campuses across the country, including attacks on students and professors."

It also criticised the rampant use of colonial-era sedition law to suppress any activists, journalists, and citizens who speak up against the Modi government and its policies.

Taking about judiciary's fading autocracy, it stated," Several key Supreme Court rulings in recent years have been favorable to the BJP, including the 2019 decision allowing the construction of a Hindu temple on the site of a historic mosque, and the court’s March 2020 decision to deny bail to a scholar and prominent critic of Modi who was charged with supporting a banned Maoist group."

With a Global Freedom Score of 67 out of 100 and an Internet Freedom Score of 51 out of 100, the Freedom in the World Report 2021' has largely been critical of the Indian government and its handling of COVID-19 pandemic, protests against the state's policies (CAA-NRC, Farmers' Protest), treatment of minorities, journalists and activists. Last year, India was in the 'Free' category with an overall score of 71 out of 100.

(The above story first appeared on LatestLY on Mar 04, 2021 05:01 PM IST. For more news and updates on politics, world, sports, entertainment and lifestyle, log on to our website latestly.com).