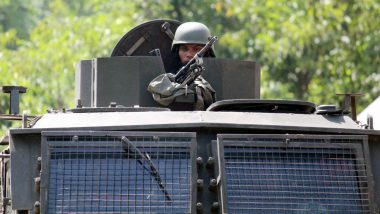 Srinagar, November 17: One Indian Army jawan was martyred and two others left injured in a blast triggered using the improvised explosive device (IED). The incident was reported in Pallanwala area of Akhnoor Sector, where a military truck was targeted using the IED. The region falls in Udhampur district of Jammu. Indian Army to Go Hi-Tech in Fight Against Terror in Kashmir, Will Soon Use Robots During Counter-Insurgency Operations.

A statement issued by the Army said three security personnel who were onboard the truck were injured in the explosion. They were rushed to the military hospital in Udhampur, where two among the victims are being treated. The third, whose identity is yet to be confirmed, succumbed to his injuries.

#UPDATE: One of the three injured Army personnel has succumbed to his injuries, at the Military Hospital in Udhampur. #JammuAndKashmir https://t.co/GRXLfuVmR9

The IED blast was reported amid the ongoing skirmish between Indian and Pakistani forces in Naushera sector of Rajouri district. The ceasefire was violated by the Pakistani forces earlier today, and is being effectively retaliated by the Indian side.

Border relations between India and Pakistan further deteriorated since February this year when an attack was carried out by Lashkar-e-Taiba in Jammu & Kashmir's Pulwama, leading to the death of 40 security personnel. Since then, the skirmishes along the Line of Control (LoC) have escalated, with India accusing the neighbouring nation of abetting infiltration under the garb of ceasefire violations.

(The above story first appeared on LatestLY on Nov 17, 2019 07:09 PM IST. For more news and updates on politics, world, sports, entertainment and lifestyle, log on to our website latestly.com).