Kalyan: Woman Gets Duped to Tune of Rs 71.15 Lakh on Promise of Tender for Maintenance of Crematorium in Navi Mumbai

Buhran assured the victim that he had enough connections in NMMC and he could easily ensure that she gets the maintenance tender. 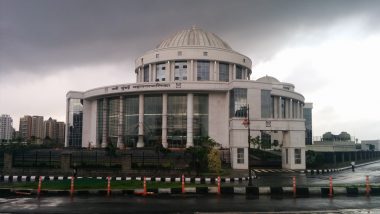 Mumbai, April 26: In an incident of fraud and cheating, a 54-year-old woman was duped to the tune of Rs 71.15 lakh after she was promised a tender in exchange for the maintenance of a crematorium in Navi Mumbai.

Cops said that the victim is a resident of Kalyan and owns a water supply business. According to a report in the Hindustan Times, the victim met the accused in 2017 regarding a business deal. Since then the two have been in contact with each other. Mumbai: 30-Year-Old Pregnant Woman Arrested With Cocaine Worth Rs 51 Lakh.

Acting on the woman's complaint, the Bajarpeth police registered a case against the accused Sohel Buhran (28), a resident of Mumbra. Buhran is yet to be arrested, an officer said.

Police officials said that back in 2017 the accused gained the trust of the woman and informed her about the tender floated by the Navi Mumbai Municipal Corporation (NMMC) regarding the maintenance of a crematorium.

Buhran assured the victim that he had enough connections in NMMC and he could easily ensure that she gets the maintenance tender.

A police officer said, "From 2017 to 2019, the accused had taken Rs 71.15 lakh from the woman under the pretext of giving her the tender. Later on, the woman continuously followed up for the tender but he made excuses and later refused to give her money back. Therefore, the complainant filed a cheating case against the accused on Sunday. Further investigation about the accused and his partners in crime is going on."

(The above story first appeared on LatestLY on Apr 26, 2022 04:04 PM IST. For more news and updates on politics, world, sports, entertainment and lifestyle, log on to our website latestly.com).