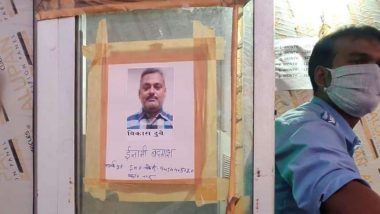 Unnao, July 6: Photos of the main accused in the Kanpur encounter, Vikas Dubey were put up at the Unnao toll plaza by police. According to an ANI update, search operation underway to nab the culprit at the earliest. Dubey, a history shelter, is the prime accused in the massacre of eight policemen in an ambush in Kanpur on Friday.

According to a Hindustan Times report, police suspect that Dubey may have slipped out of Uttar Pradesh before the state’s borders were sealed. A reward of Rs 1 lakh was announced for his arrest. Fifty dedicated teams and over 3,000 police personnel across the state have been deployed in a massive manhunt to nab him. However, the gangster has remained elusive till now. Vikas Dubey Should be Shot Dead by Police, Says UP Gangster's Mother; Condoles Policemen's Deaths in Kanpur Encounter.

Eight police personnel were shot dead and seven policemen seriously injured in the encounter that broke out during the raid. The deceased included Bilhaur circle officer Devendra Kumar, who was leading the team, three sub-inspectors and four constables.

(The above story first appeared on LatestLY on Jul 06, 2020 10:14 AM IST. For more news and updates on politics, world, sports, entertainment and lifestyle, log on to our website latestly.com).