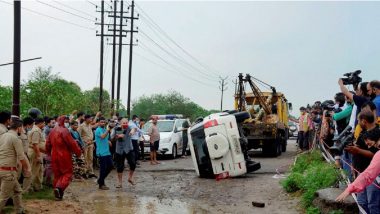 Site where Vikas Dubey was encountered on outskirts of Kanpur | (Photo Credits: PTI)

Lucknow, July 22: Uttar Pradesh government on Wednesday constituted a new committee to probe gangster Vikas Dubey's encounter case. The probe committee will have to submit its report within two months. It would be headed by retired Justice BS Chauhan and also include former UP DGP KL Gupta as a member.

Earlier on Monday, Supreme Court had asked the UP government to consider adding a former apex court judge and a retired police officer in the inquiry committee which is probing the encounter of gangster Vikas Dubey. The apex court was "appalled" that the gangster got bail despite so many cases against him. Vikas Dubey Encounter: Supreme Court Asks UP Govt to Consider Having Ex-Judge of Top Court in Inquiry Committee.

During the hearing, the bench -- headed by CJI S A Bobde -- said, "We are appalled to the fact that a person like Vikas Vikas Dubey got the bail despite so many cases. This is the failure of the institution and the person, who should have been behind the bars, got bail."

The dreaded gangster was killed by the UP Police on July 10 after trying to flee when the police van -- in which he was being brought to Kanpur from Ujjain -- overturned. He was arrested by the temple police in Ujjain on July 9. Prior to Dubey's encounter, five of his alleged associated were killed in separate encounters. On July 3, eight policemen, including DSP Devendra Mishra, were ambushed in Bikru village in Chaubeypur area of Kanpur, when they were going to arrest Dubey and fell to bullets fired from rooftops shortly after midnight.

(The above story first appeared on LatestLY on Jul 22, 2020 04:15 PM IST. For more news and updates on politics, world, sports, entertainment and lifestyle, log on to our website latestly.com).