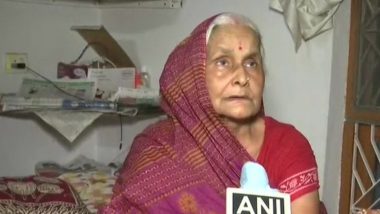 Kanpur, July 22: A day after police announced a reward of Rs 20,000 on Deep Prakash Dubey, his mother Sarla Devi urged his son to come forward and surrender to police. According to an ANI update, she asked Deep Prakash, who is also the brother of slain gangster Vikas Dubey to surrender or else, police will not only kill him but also his family.

She added, "You will get the safety of police, you have done nothing, don't hide because of your relationship with your brother Vikas. Vikas Dubey Encounter: Post-Mortem Report States 'Hemorrhage And Shock Due to Ante-Mortem Firearm Injuries' as Cause of UP Gangster's Death.

Deep Prakash please come forward & surrender, else police will kill you & your family. You will get safety of police, you have done nothing, don't hide because of your relation with your brother Vikas Dubey: Sarla Devi, mother of Deep Prakash Dubey & Vikas Dubey #KanpurEncounter pic.twitter.com/hOFPhpuEUZ

Deep Prakash Dubey has been absconding since July 3 when the massacre took place in Bikru village in which eight policemen were shot dead by Dubey and his gang. Deep Prakash Dubey, according to police sources, was aware of his brother's activities and is an accomplice in his unlawful deeds.

(The above story first appeared on LatestLY on Jul 22, 2020 09:40 AM IST. For more news and updates on politics, world, sports, entertainment and lifestyle, log on to our website latestly.com).