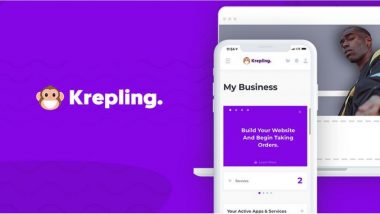 In industries across the globe, the way we work and converse may never be the same again. COVID-19 has changed the way businesses interact with their employees and the movement towards remote work as a viable model has been set in motion. Tech companies have been the first to enhance their work models, as the majority of software-based employees are arguably able to code from any remote location.

Major tech companies like Twitter and Shopify have announced policies allowing the majority of employees to work from home on a permanent basis, most of which have enjoyed enormous gains during the COVID-19 pandemic, for example; Shopify surpassed RBC to take the top spot on the Toronto Stock Exchange as its shares rose more than seven percent following financial results that surpassed expectations, mostly due to adaptation during the COVID-19 pandemic.

Krepling, a centralized commerce tech company operating on a typical SaaS business model, has been one of the many post-COVID gainers. With the majority of small businesses and big brands alike facing shutdowns due to COVID-19, many brands have switched to selling and conversing online and many are using Krepling's technology to do it. With Krepling's proprietary differentiator being its ability to cater towards more than just retail-based brick-and-mortar businesses, alongside the ability to 'centralize' their business's overall e-commerce experience, it has allowed the company to separate itself from its not so distant competitors like Shopify and Amazon.

Krepling has enjoyed major gains throughout the COVID-19 pandemic. The tech startup was one of the first e-commerce orientated players to announce COVID-19 restrictions and price reductions. Their ability to act before the majority of its major competitors allowed it to begin experiencing gains in the US and Europe whilst ensuring a low churn rate across it's 3 different plans. Krepling was also one of the only e-commerce platforms to have a price reduction on all of its key plans, something critics and business leaders were quick to call a 'bold move' by the company. However, it's Krepling's move towards the remote workspace that has proven to be transformational for the company. In early 2019, Krepling issued a press release where CEO, Liam JE Gerada, stated that Krepling was going to continue to adopt a 'gig-based approach' to their overall workforce, and were going to be employing software engineers on a remote basis. This idea was not uncommon amongst tech startups due to a lack of resources, however, this approach was continued, causing 'absolutely no disruption' to Krepling's momentum during the pandemic, in essence, allowing it to accelerate the startup's overall gains, a trend seen amongst most popular tech companies.

As Krepling begins to become one of the fastest-growing e-commerce bootstrappers, the questions towards Krepling first raise from venture capitalists and other outside investors in increasing rounds as valuations continue to rise are becoming more real by the second. As long as the myth of Silicon Valley itself, Krepling's notable bootstrapped approach, similar to that of MailChimp, has allowed it to become more enticing to venture capitalists in the commerce space.

Liam JE Gerada, believes more companies will follow Krepling's lead towards a 'gig-based' workforce, and that more employees are prepared to make this transition. The company also is developing platform-based features to allow businesses to become more involved with work-from-home solutions. Whilst this approach has allowed Krepling to hire more globally, their continued growth across the United States is expected to remain constant.

Whilst there is a concern over what a work-from-home world will mean for small businesses that rely on employment hubs for day-to-day business, Krepling has remained confident in being able to support businesses across all industries in areas such as selling, managing, and scaling in the online space.