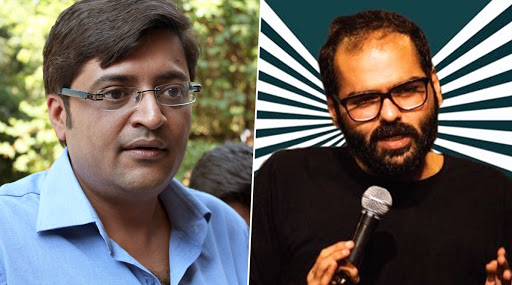 New Delhi, January 29: Comedian Kunal Kamra was barred from flying on its flight by domestic carrier SpiceJet. The announcement was made by the airline a day after a similar restriction was imposed on Kamra by private flyer IndiGo and national carrier Air India. The regulatory action is based on a viral video in which Kamra could be seen "heckling" journalist Arnab Goswami inside a Lucknow-bound flight. Kunal Kamra Barred by Air India After His Video Heckling Arnab Goswami Onboard IndiGo Flight Went Viral.

Kamra and Goswami were onboard the same IndiGo flight on Tuesday. In the video which went viral, Kamra could be seen hitting out at Goswami over his alleged pro-government stand. He also questioned him for conducting a debate on his channel over the caste of deceased Hyderabad Central University scholar Rohith Vemula.

Goswami, as seen in the footage uploaded by Kamra, did not issue a response to him. He remained muted throughout the two minutes when he was confronted by Kamra. The comedian was forced to retreat upon the intervention of flight officials.

I did it for Rohit pic.twitter.com/aMSdiTanHo

SpiceJet has decided to suspend Mr. Kunal Kamra from flying with the airline till further notice. @MoCA_GoI @DGCAIndia @HardeepSPuri @IndiGo6E

The incident involving Goswami and Kamra erupted at the Mumbai-Lucknow flight 6E 5317. Within a few hours, IndiGo added Kamra on the no-fly list for the next six months, in accordance with guidelines issued by the Directorate General of Civil Aviation in reference to unruly passengers.

Hereby, we wish to advise our passengers to refrain from indulging in personal slander whilst onboard, as this can potentially compromise the safety of fellow passengers. 2/2@MoCA_GoI @HardeepSPuri

Civil Aviations Minister Hardeep Singh Puri condemned the behaviour of Kamra on the IndiGo flight, and asked other carriers to take pre-emptive action against him. Subsequently, Air India issued a statement banning Kamra from boarding its flights. Spicejet joined the list today.

"Offensive behaviour designed to provoke and create disturbance inside an aircraft is absolutely unacceptable and endangers safety of air travellers. We are left with no option but to advise other airlines to impose similar restrictions on the person concerned," Puri said.