A number of motorists had a narrow escape when the landslide occurred on the Western Express Highway at Malad. 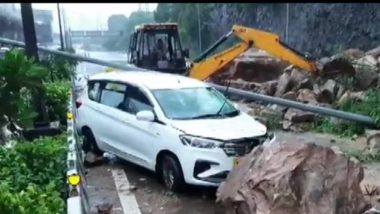 Mumbai, August 4: Following heavy rains in Mumbai and adjoining areas, there was a huge landslide on a hillock with tonnes of debris falling on the Western Express Highway at Malad near Kandivali early hours on Tuesday. A number of motorists had a narrow escape when the landslide occurred on the Western Express Highway at Malad. A video of the landslide and subsequent chaos has surfaced on social media. Mumbai Rains: Local Train Services Disrupted, BEST Bus Routes Diverted Due to Severe Waterlogging in Lower Parel And Other Areas.

The video showed tonnes of debris falling on a section of the Western Express Highway where the vehicular movement was at a slow pace due to incessant rainfall. People can be seen rushing towards a safe place as soon as the landslide occurs. Fortunately, there was no report of anyone getting wounded or stuck due to the landslide. Following the incident, south-bound road traffic was blocked with commuters stuck. Mumbai Rains: BMC Appeals to All Offices & Other Establishments to Remain Closed Today in Mumbai, Except For Emergency Services.

Lucky escape of many motorist who witnessed a massive landslide at #westeren express Highway near Kandivali . @fpjindia #MumbaiRains #landslide pic.twitter.com/MnGoydQhcw

The India Meteorological Department has issued a red alert Mumbai, North Konkan, and Thane districts of Maharashtra for the next 48 hours following incessant rains in the regions. With a high tide expected at 12:47 pm, the Brihanmumbai Municipal Corporation (BMC) has issued an alert to all concerned departments and also to citizens to not go near any beach or low lying areas.

(The above story first appeared on LatestLY on Aug 04, 2020 10:53 AM IST. For more news and updates on politics, world, sports, entertainment and lifestyle, log on to our website latestly.com).