An eight-year-old girl was attacked and mauled to death in Amreli district of Gujarat on Friday morning while she was asleep in the open field. 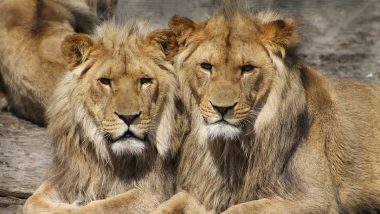 Gandhinagar, October 16: In another incident of lion attack, a 8-year-old girl was allegedly mauled to death by the wild animal while she was asleep during the early hours of Friday at Goradaka village in Amreli district of Gujarat. According to reports, the incident came to light when the deceased's parents started to look for the girl after she went missing. However, they were only able to find remains of her body parts in the nearby area.

The girl's parents, who are migrant labourers, along with other people spotted two lions in the area. "When her parents and other labourers realised that the girl was missing, they went looking for her and found her remains in a nearby field. They also spotted two lions in the same area," said the forest department officials, as reported by the Hindu. Leopard Attack Foiled in Mumbai: Woman Fights Off Big Cat With Walking Stick in Aarey Colony, Watch Video.

According to the report, a local forest official said, “While no one saw the lions taking the girl away, circumstantial evidence suggests that the child was mauled to death by the animals." The incident reportedly took place when the girl, along with her family, was asleep in the open field. Mumbai: 14-Year-Old Boy Injured in Leopard Attack in Aarey Colony; Eighth Such Incident in Area in Month.

A similar incident of animal attack was reported from Madhya Pradesh earlier this week. A two-year-old girl was reportedly attacked by a leopard in Dhar district of Madhya Pradesh while she was playing in the field. The big cat attempted to drag the girl, however her parents hurled shoes at the leopard and he fled. However, the girl died on Tuesday night while undergoing treatment.

(The above story first appeared on LatestLY on Oct 16, 2021 10:12 AM IST. For more news and updates on politics, world, sports, entertainment and lifestyle, log on to our website latestly.com).