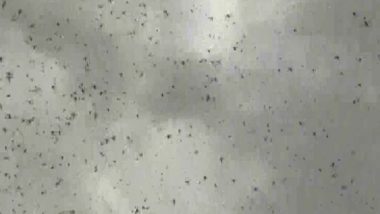 Jaipur, May 25: Large groups of locusts have destroyed crops spread over at least five lakh hectares of land so far in Rajasthan’s Jaipur. These locusts have led to the destruction of crops, thus affecting the livelihood of thousands of farmers in Rajasthan. The locust menace spread its wings to other parts of India also, including states like Uttar Pradesh, Haryana and Punjab and Madhya Pradesh. Locust Swarm Attacks North India: Scary Pics and Videos of 'Tiddi Dal' From Rajasthan, Madhya Pradesh and Uttar Pradesh Worry Farmers.

According to a report published in India Today, on Monday, residents of Jaipur witnessed millions of locusts swarming over the city. Large groups of pink locusts destroyed lush green fields of Rabi crops In Western Rajasthan's Sri Ganganagar, Bikaner and Barmer districts in 2020. The farmers in this state are facing problem due to these insects from the last three months. Locusts have entered India from Pakistan. Locust Attack in India: Farmers in Agra Asked to Remain Alert as Swarms of Pests Reach Neighbouring District in Rajasthan.

Video of Locust Attacks in India:

In several areas, India's indigenous drone industry came to the rescue of the farmers from the locust attacks. In Uttar Pradesh, a sudden movement of locust swarm was spotted in the outskirts of Jhansi district last week. In Madhya Pradesh also locust swarms were spotted in Malhargarh, Mandsaur district on Sunday. Agriculture department swung into action and removed around 60 percent of them by spraying.

Locust refers to a large group of a grasshopper species which invade a region in a swarming stage and devastate crops. This stage can lead a swarm of locust having over a billion individual inspects. In February this year, swarms of locusts attacked Iran. A state of emergency was also declared in Pakistan due to the locust menace. Earlier in 2020, the Food and Agriculture Organisation (FAO) of the United Nations had also warned India about a twin invasion of desert locusts.

(The above story first appeared on LatestLY on May 25, 2020 04:44 PM IST. For more news and updates on politics, world, sports, entertainment and lifestyle, log on to our website latestly.com).