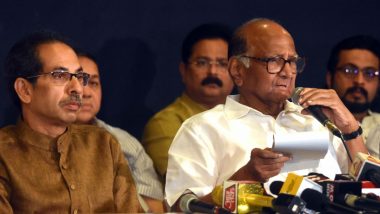 "The orders issued by Mumbai Police Commissioner for internal transfers in Mumbai have been cancelled," Maharashtra Home Minister Anil Deshmukh said on Sunday. According to reports, Sharad Pawar, who met Chief Minister Uddhav Thackeray on Friday to discuss the issue, was upset with the Mumbai Police decision. Pawar reportedly told Thackeray that the administration was taking decisions without consulting the NCP and the Congress - two allies in the Shiv Sena-led government. JP Nadda Slams Uddhav Thackeray Over Shiv Sena's 'Uncrealistic' Alliance With NCP And Congress.

"Although our party has the home portfolio, our ministers were not taken into confidence by the police department. Congress was also not taken into confidence. That is why we were upset; the officers take all the decisions themselves," an NCP leader was quoted by Mumbai Mirror as saying. After Pawar's meeting with Thackeray, Mumbai Police Commissioner Param Bir Singh also met the Chief Minister on Saturday to discuss the issue.

The stay on transfer of DCPs has come as a second blow to Singh who was recently forced to amend the Mumbai Police's two-kilometre radius rule during the lockdown. The city police had restricted people's movement within a two-kilometre radius of their houses. The rule was highly criticised by the business community, including traders and shopkeepers, who sought help from Pawar. Subsequently, the police were forced to amend the rule.

(The above story first appeared on LatestLY on Jul 06, 2020 03:53 PM IST. For more news and updates on politics, world, sports, entertainment and lifestyle, log on to our website latestly.com).