Maharashtra Govt to Investigate if Sachin Tendulkar, Lata Mangeshkar And Other Celebrities Tweeted in Support of Farm Laws Under Centre's Pressure

The Maharashtra government on Monday decided to launch a probe into tweets of celebrities, including Bharat Ratna recipient Lata Mangeshkar and Sachin Tendulkar, in support of farm laws. 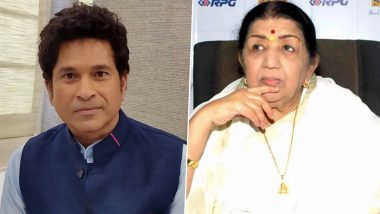 Mumbai, February 8: The Maharashtra government on Monday decided to launch a probe into tweets of celebrities, including Bharat Ratna recipient Lata Mangeshkar and Sachin Tendulkar, in support of farm laws. The Uddhav Thackeray-led government would investigate whether these celebrities tweeted due to pressure from the Centre.

The development came a day after the Congress, which is part of Maha Vikas Agadi coalition in the state, demanded an investigation into the tweets in support of the Central government. Sachin Sawant, Maharashtra Congress general secretary and spokesperson, met state home minister Anil Deshmukh with the demand to order a probe into the matter. Rihanna Tweets About Farmer Protests in India, Leaves Indian Fans Divided.

"It has been revealed that there were same posts by celebrities at the same time, hence it will be investigated why it has happened," reported Outlook India quoting Deshmukh as saying.  Sawant said that series of tweets by celebrities after Rihanna expressed solidarity to farmers' protest could be due to pressure by the Bharatiya Janata Party (BJP). Indian Youth Congress Workers in Kochi Pour Black Oil on Sachin Tendulkar's Cut-Out in Protest to His Tweet.

"There was series of tweets after MEA's response to Rihanna's tweet. If a person opines on their own, it's fine but there's scope of suspicion that BJP could be behind this...Spoke to HM Deshmukh. He has given orders to Intelligence dept to probe," stated the Maharashtra Congress General Secretary.

There was a series of tweets after MEA's response to Rihanna's tweet. If a person, be it a celebrity, opine on their own, it's fine but there's a scope of suspicion that BJP could be behind this. We have cited common words like 'amicable' in these tweets: Sachin Sawant, Congress pic.twitter.com/mjLPrJsgpu

Controversy erupted after celebrities, including Tendulkar, Mangeshkar, Akshay Kumar and Ajay Devgn, came out in support of the government asking foreign nationals not to interfere in India's internal matter. They used hashtags - #IndiaTogether and #IndiaAgainstPropaganda following tweets by Rihanna and climate activist Greta Thunberg. Indian celebrities responded to Rihanna and Thunberg's tweets after the MEA in a statement lashed out at foreign nationals to refrain from reacting on India's internal matter with proper knowledge of the issue.

(The above story first appeared on LatestLY on Feb 08, 2021 05:01 PM IST. For more news and updates on politics, world, sports, entertainment and lifestyle, log on to our website latestly.com).