On Tuesday (Feb 2), Rihanna took to Twitter and extended her support to the ongoing farmers protest in India. The Hollywood icon shared the news by CNN and asked, "Why aren't we talking about this?! #FarmersProtest." Check out the full story. 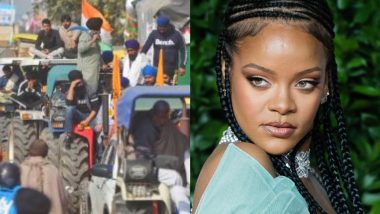 On Tuesday (Feb 2), Rihanna took to Twitter and extended her support to the ongoing farmers protest in India. The Hollywood icon shared the news by CNN and asked, "Why aren't we talking about this?! #FarmersProtest." The singer is quite a popular face in the international circuit and has some of the greatest hits to her credit. Rihanna's latest tweet has garnered mixed reactions where some are supporting her and a few are not. The singer has around more than 100 million followers on the micro-blogging site. Diljit Dosanjh, Sonu Sood, Richa Chadha and Others Extend Their Support to the Protesting Farmers (View Tweets).

With this, she joins the list of other celebs who have earlier came in support of the farmers who are protesting against the Centre's laws. The article that is shared by the singer talks about how the mobile internet has been scrapped at the border sites in Delhi where farmers have been fighting it out against the authorities. Her tweet has divided Indian fans. Farmers' Protest: Barricades to Open on January 26 As Delhi Police Gives Permission For Tractor Rally; Farmers Allowed to Enter Upto 100 Km Within National Capital.

why aren’t we talking about this?! #FarmersProtest https://t.co/obmIlXhK9S

The farmers' protest in India has grabbed attention across the globe. For the one's who aren't aware, on 72nd Republic Day, a tractor rally which was led by the farmers turned chaotic and violent. Owing to the same, mobile internet services were disconnected in Delhi's border and more. We wonder when a solution to this will be served by the government. Stay tuned!

(The above story first appeared on LatestLY on Feb 02, 2021 10:41 PM IST. For more news and updates on politics, world, sports, entertainment and lifestyle, log on to our website latestly.com).