The Maharashtra government on Tuesday issued fresh guidelines as part of its 'Mission Begin Again' move to ease restrictions that had been imposed due to coronavirus-induced lockdown. 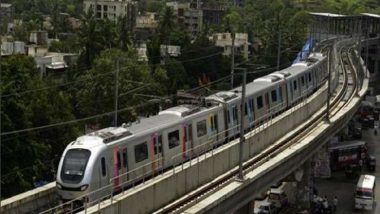 Mumbai, October 14: The Maharashtra government on Wednesday issued fresh guidelines as part of its 'Mission Begin Again' move to ease restrictions that had been imposed due to coronavirus-induced lockdown. As per the new guidelines, metro train services will resume from tomorrow in a phased manner, while educational institutes and places of worship will remain shut till October 31 across Maharashtra.

A set of relations were announced for businesses and markers. According to guidelines, business to business exhibitions are now allowed outside containment zones. Weekly markets and libraries can reopen. Shops will function from 9 am to 9 pm. Places of worship, schools, colleges and other educational and coaching institutions will remain closed till October 31, said the directive. Unlock 5 Guidelines: Cinema Halls, Entertainment Parks to Reopen, States Allowed to Open Schools From October 15, Parents' Consent Mandatory.

The new guidelines came a day after Maharashtra Governor Bhagat Singh Koshiyari took on Chief Minister Uddhav Thackeray for not allowing the re-opening of temples. "You have been a strong votary of Hindutva… Have you turned ‘secular' yourself, the term which you hated?" Koshyari asked Thackeray. Temple Re-Opening in Maharashtra: Sharad Pawar Backs CM Uddhav Thackeray in War of Words Against Governor Bhagat Singh Koshyari.

Hitting back, Thackeray said what the Governor mentioned about ‘Hindutva' was absolutely correct. "However, I don't need a certificate on Hindutva from anybody, nor do I have to learn it from anyone. Those giving a warm welcome to people who compare my state and its capital (Mumbai) with Pakistan Occupied Kashmir don't fit in my Hindutva," the Chief Minister asserted.

Reacting to the Governor's comments on Thackeray's ‘secular' credentials, the Shiv Sena President asked: "Are you implying that merely opening temples is ‘Hindutva' and keeping them shut is being ‘secular',?" "You have taken the oath as Governor on the Constitution whose core principle is ‘secularism' – don't you agree with that," Thackeray asked pointedly.

(The above story first appeared on LatestLY on Oct 14, 2020 04:51 PM IST. For more news and updates on politics, world, sports, entertainment and lifestyle, log on to our website latestly.com).