According to reports, the Maharashtra government has launched 'Mission Malegaon' to tackle the COVID-19 pandemic in this area, which is densely-populated. 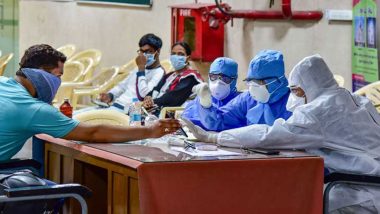 Nashik, April 30: Maharashtra continued to remain the worst-affected state with coronavirus cases surging to 9,915. Amid the spike in COVID-19 cases, Malegaon in Nashik district has emerged to be one of the five hotspots in the state. According to a report by Hindustan Times, the Maharashtra government has launched 'Mission Malegaon' to tackle the COVID-19 pandemic in this area, which is densely-populated. The report further adds that of the total cases in the district, as much as 90% cases have been reported in Malegaon. This means of the 195 cases in the district, 171 were from Malegaon.

The report further states that 12 coronavirus related deaths have also been reported from the city and the COVID-19 tally in Malegaon has doubled from 85 in a week since April 21. According to reports, the spike in the number of coronavirus cases is mainly because people in the area have not been following containment mechanisms and social distancing norms. Due to this, the city has witnessed a sudden spike and is listed among the top five hotspots in the state along with Mumbai, MMR, Nagpur, and Pune. India’s COVID-19 Count Rises to 33,050 With 1,718 New Cases in Past 24 Hours, Death Toll Jumps to 1074.

The HT report further states that Maharashtra has now appointed a task force of medical workers to control the situation in Malegaon. An official from the district collectorate was quoted in the report saying that lockdown orders were ignored and several industries including power loom and handloom industries were working for a few days after the lockdown announcement.

In the wake of the situation there, State health minister Rajesh Tope has said that the death rate in Malegaon is high because patients did not report symptoms. He added saying that this made it difficult for the authorities to trace contacts.

(The above story first appeared on LatestLY on Apr 30, 2020 10:00 AM IST. For more news and updates on politics, world, sports, entertainment and lifestyle, log on to our website latestly.com).